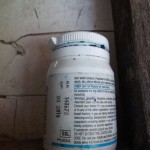 The tub that contained Carbofuran © NWCU

Keith Mingins aged 58 yrs of Main Street, Firzington, Cumbria appeared at Workington Magistrates Court today (29/04/2015), where he pleaded guilty to the illegal storage of the banned pesticide Carbofuran.  Carbofuran was previously used in agriculture as an insecticide, but it lost its approval for use and has been banned since 2001.

Keith Mingins keeps and breeds racing pigeons.  In April 2015 officers from Cumbria Police, Natural England and the National Wildlife Crime Unit searched pigeon lofts owned by Mr. Mingins.  During the search they found an old paracetamol tub that contained a a blue granular substance, which was later analysed and identified as Carbofuran.

When interviewed Mr. Mingins told officers that he been given the substance by his father-in-law, who had died a few months earlier, he said that didn’t know what it was, but he had used it to poison rats.

Mingins, who had no previous convictions was fined £300, and ordered to pay costs and a victim surcharge totalling £115.