Yesterday evening (05/02/2014) the UK Government committed to funding the NWCU until 2016 in its document, ‘UK commitment to Action on the Illegal Wildlife Trade’:

In response to the announcement the Association of Chief Police Officers lead on Wildlife and Rural Crime, Chief Constable Simon Prince said:

“The National Wildlife Crime Unit (NWCU) has a critical role in the prevention and detection of Wildlife Crime; the Unit collates and disseminates intelligence from forces and agencies across the country, which enables a coordinated approach to this form of criminality. Additionally, staff of the NWCU have specialist knowledge of this complex area of policing and provide expert advice to Police Officers throughout the UK who are responsible for the investigation of Wildlife Crime.

“This funding announcement is very much welcomed by the Police Service. Wildlife Crime can result in far reaching damage to certain species and the environment, and there are many who seek to illicitly profit from the trade in endangered species worldwide.

“The additional funding secures the future of the NWCU over the coming years, and ensures that we continue to have a national capability which is essential in identifying and bringing to justice those involved in this type of crime.”

The Head of Unit at the NWCU, Detective Inspector Nevin Hunter said:

“This funding commitment will enable the NWCU to continue to provide support to Police Wildlife Crime Coordinators and Police Wildlife Crime Officers across the UK. We will work with them to address the UK national wildlife crime priorities. The IWT announcement yesterday by the UK Government is hugely important, but it is vital that we also provide support to investigations involving bats, badgers, fresh water pearl mussels and where poaching and raptor persecution take place.

The development of the NWCU has seen the investigation of wildlife crime increasingly professionalised in recent years, with it being seen as relevant and important across the Police service. The unit will continue to support this – developing national standard operational practices in conjunction with the College of Policing.

In recent months the NWCU has worked closely with the Border Force and the newly formed National Crime Agency (NCA). The unit hopes to build upon the relationship with the NCA in order to address serious and organised crime in whatever form it takes to ensure the conservation of not only globally important, but also iconic species of wildlife across the UK”.

Background:
1. The NWCU was established in October 2006 and is currently based at Livingston near Edinburgh.
2. It is a police-led unit with the UK wide remit for wildlife crime and is the focal point for all Police wildlife crime intelligence and investigation in the UK.
3. The unit acts as a conduit through which law enforcement bodies can communicate with their colleagues throughout the world. It is primarily there to support UK law enforcement and is not a prosecuting agency.
4. The NWCU gathers intelligence on national wildlife crime and also provides analytical and investigative support to the Police service and Border Force.
5. Close liaison between the NWCU, the Border Force CITES team, the Metropolitan Police Wildlife Crime Unit, DEFRA , Home Office and the UK CITES Management Authorities including the Animal Health and Veterinary Laboratories Agency, Joint Nature Conservation Committee and Royal Botanical Gardens Kew has strengthened the UK response to tackling illegal wildlife trade in recent years and represents best practice that can be proudly shared globally.

Jiezhen Jiang, a 58 year old Auckland man, was fined a total of $12,000 for illegally importing elephant ivory into New Zealand. His conviction came as a result of coordinated UK enquiries by the National Wildlife Crime Unit, Gloucestershire Police and UK Border Force which resulted in the successful UK conviction of Antiques dealer Alex Maw for selling ivory ornaments online (Sept 2012). A senior investigator in the New Zealand Department of Conservation said “This successful prosecution would not have been possible without the cooperation of government agencies within New Zealand and assistance from the United Kingdom’s National Wildlife Crime Unit”. 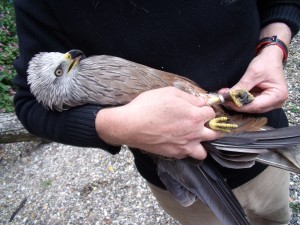 One of the Beaven Black Kites being examined. Credit: NWCU.

NWCU ISO worked closely with Gloucestershire Constabulary CID on Operation Artio, which resulted in a suspended sentence being given to Keith Beaven for stealing rare owls. Beaven, the former owner of a bird-of-prey centre, of Staunton near Gloucester, was convicted of stealing six owls and also illegally selling three protected black kites. He tricked zoos into thinking he ran the National Birds of Prey Centre near Newent despite having sold it in 2008. Beaven was given a 40-week sentence, suspended for 18 months, at Gloucester Crown Court. He was also ordered to pay over £16,000 in costs.

McManus-Dunkley holding one of the forfeited birds – a European Buzzard which is shown being scanned for a microchip during the AHVLA inspection on 8th August 2011. Credit: AHVLA.

Falconer Andrew McManus-Dunkley was convicted of 7 offences relating to the illegal display and trade in birds of prey. He was fined £7,000 fine and all the birds were forfeited. Birds were found being used commercially on display to the public. Investigations later revealed that McManus-Dunkley had also sold a European Eagle Owl without the necessary documentation and had lied to a purchaser by claiming he had this. All birds of prey found in England are protected by legislation to ensure that they are only used commercially and legitimately using documents issued under the provisions of the European Wildlife Trade Regulations and are protected to the same extent as Tigers, Pandas, Elephants and Rhinos. The legislation aims to protect wild birds by ensuring that only captive bred birds are traded. Speaking after the conviction Detective Inspector Nevin Hunter, the Head of the National Wildlife Crime Unit said: ‘The actions of this man have undermined the activities of all falconers who comply with the regulations regarding commercial use of and trade in endangered species of birds. “Birds of prey are protected from illegal exploitation and it is vital that the Police work with our partner agencies to reassure the public that we take the matter of wildlife crime seriously. Sgt Andy Whysall from Avon and Somerset Police, the Compliance Team from AHVLA and my team have worked closely on this case and should be commended for bringing this man to court.” 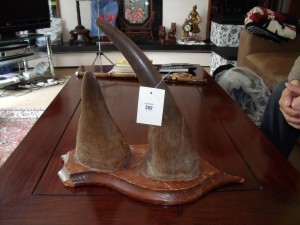 Ji Ming Shi, a Chinese national from Cardiff, purchased 2 x Rhino Horns from an auction house for £44,000. The horns were sold with prior authorisation of AHVLA, but there was notification that CITES export permits would not be issued. Having purchased the horns Shi still went ahead and applied for CITES export permits which were refused. In March 2011 Shi made a further application to export the rhino horns to China, he failed to notify the authorities that he had had a previous application refused. Applicants are obliged to declare previous applications, and Shi had signed the certification indicating that there had not been any previous applications. Following an investigation by the NWCU, Shi was prosecuted for making a false statement to obtain an export permit and was convicted following a trial. Shi received an absolute discharge for the offence, but the court ordered the forfeiture of the horns, which had cost Shi £44,000.