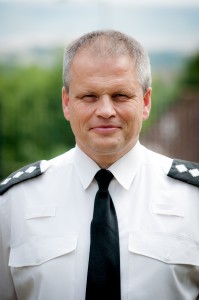 The NWCU team are pleased to announce that Chief Inspector Martin Sims has been appointed as the new Head of Unit.

Martin is a serving Sussex Police Officer with 27 and a half years experience.  He joined Surrey Police in 1987 and having served 11 and a half years in his home force, transferred to Sussex Police.  In 2009, he became Head of Profession for Wildlife Crime and has developed his skills and experience in this sphere over that time.  In his spare time Martin is reading for a degree in Countryside Management.

With regards to his new role, Martin said “I feel very honoured to have been given the appointment and feel very lucky to be given the chance to do some aspects of my hobby, as a full-time job.  I recognise the way Nevin has moved things forward for tackling Wildlife Crime over the past two and a half years with the team and I have a responsibility for keeping that momentum going.  I know they are a big pair of shoes to fill!  I really look forward to working with many of the partner agencies with whom I have built up relationships over the past 5 years, on a Regional basis and now move that to a National level.”

Martin is expected to take up his new post with NWCU in September/October this year.