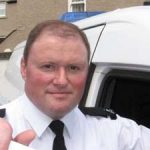 It is a competition entered by the UK’s top professional and amateur photographers from around the UK with several categories catering for differing photographic environments and perspectives. Charlie’s image of the Bass Rock – depicting the sheer number of birds nesting on the island – has won the ‘Habitat’ category. It is a photograph from a four year project that he has been working on called ‘Forthshore – East Lothian’s Coastline’ which concluded this year.

Last night (Monday 5th September 2016) Charlie attended the award ceremony at the Mall Gallery, London, where the awards were announced for public release.