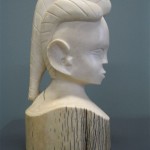 May 2017 – around 40 Police Wildlife Crime Officers from northern police forces – plus specialist CPS Prosecutors – recently attended a training day hosted by Leeds Discovery Centre.  The event was aimed at increasing officers’ skills and awareness in dealing with the illegal trade in endangered species.

The facilitators included the National Wildlife Crime Unit, Joint Nature Conservation Committee and Animal and Plant Health Agency who have developed training scenarios for officers to deal with, such as the illegal trade in birds of prey, elephant ivory, taxidermy and internet based crime.

A similar event was held at the Natural History Museum for southern police forces in November last year.

Wildlife Training’s Craig Fellowes who coordinated the course said, “The feedback from officers that attended both events has been extremely positive”.

Attendee Sarah Rolland from Cumbria Police said, “The various scenarios gave us the opportunity to put training into practice and share best practice with colleagues from other forces.  Having experts from specialists departments like the NWCU and JNCC was invaluable”

A further 3-day specialist CITES (Convention on International Trade in Endangered Species) course for police officers is being held this week in Staffordshire.