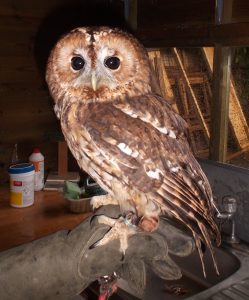 Police visited Tavernor’s home on 4th September 2016 where they found a Tawny owl which was wearing a leg ring indicating that it was bird that had been lawfully bred in captivity. However, when officers from the National Wildlife Crime Unit made inquiries about the provenance of the owl they found that the ring had originally been fitted to a captive bred Barn owl. Subsequent inquiries indicated that that Barn owl had been lawfully bred in captivity and had been sold to Tavernor. However, at some stage the ring has been removed from the Barn owl and placed on the Tawny owl.

Tavernor was charged with possessing a wild Tawny owl, an offence to which he has now pleaded guilty. A further charge relating to the possession of a European Eagle owl was withdraw.

Sentencing was adjourned until 10th April 2017 when he will also be sentenced for offences contrary to the Animal Welfare Act relating to dog that had been in his possession. Tavernor had pleaded guilty to those offences at a previous hearing.

During the investigation, the NWCU identified another individual that had made false statements to obtain permits to sell Annex ‘A’ species (Barn owls), this was not directly linked to offence committed by Tavernor and the offender was dealt with by way of a caution.