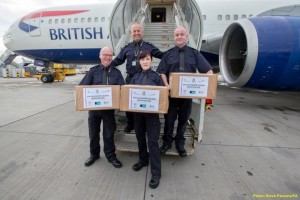 Twelve critically endangered iguanas seized from smugglers by Border Force officers at London’s Heathrow Airport have been returned home to their native Bahamas.

The reptiles were discovered in the baggage of Romanian nationals Angla-Alina Bita, and Vitora-Oliva Bucsa on 3 February by staff carrying out customs checks.

The iguanas were each wrapped in an individual sock and had been stuffed into suitcases. Twelve survived their journey but one died in transit.

They were identified as San Salvador rock iguanas, a species so rare that only a few hundred are known to be in existence. As such they are controlled under the Convention on International Trade in Endangered Species (CITES).

The women were later sentenced to 12 months in prison for smuggling, after an investigation by the UK’s National Crime Agency (NCA).

Following the seizure, officers from Border Force’s specialist CITES team worked with the Bahamas High Commission in London to arrange their return to their native islands. 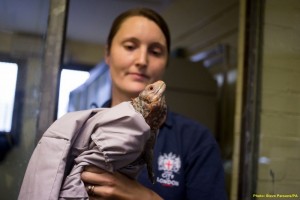 One Wednesday 9 July the iguanas were taken from the City of London Corporation’s Animal Reception Centre at Heathrow to board a British Airways flight to Nassau, accompanied by two Border Force officers, for their journey.

They were then transported to a government research station on the island of San Salvador where they will be monitored by experts, with the eventual aim of retuning them to the wild.

“Border Force takes its role in preventing illegal wildlife trafficking very seriously and with this particular species being so critically endangered it was an incredibly significant seizure in conservation terms.

“We were in contact with the Bahamas High Commission in London from an early stage and straight away it became clear that getting them back to their natural habitat was going to be really important.

“Arranging the repatriation of such rare animals is complex and sensitive, but I’m delighted that through our close work with the Bahamian authorities, British Airways, the City of London Corporation and other partners we have succeeded.

“Not only has Border Force made sure that the criminals responsible for smuggling these animals are behind bars, we’re also proud to have been able to play a part in safeguarding the future of this species.”

The Bahamas Minister of The Environment, The Honourable Kenred Dorsett, said:

“Wildlife crime is a global problem, which only collectively we can address. This crime plagues animals and plants particularly, like the case of the Bahamian iguanas, species which are extremely rare and from remote places.

“The systematic pillage which we are witnessing compromises the ecosystems where they are found and its effects are particularly devastating for small island states such as the Bahamas.

“We thank the government of the UK for their excellent cooperation as they have gone to extraordinary lengths to ensure the successful repatriation of these animals and we look forward to working with other countries as well as local, regional and international NGOs to address the challenge.”

IAG Cargo arranged complimentary carriage of the iguanas to fly them back to the Bahamas on a British Airways flight. As the species is so incredibly rare, special dispensation was given to carry them in the main cabin of the aircraft.

The British Airways flight BA253 to Nassau was flown by Captain Al Matthews, who said:

“Naturally, all of our customers are special, but despite having flown Prime Ministers and members of the Royal Family, these iguanas are by far the most unusual.

“You don’t expect to share your cabin with incredibly rare reptiles. However, I can confirm all the iguanas were securely stored throughout the flight and had the most comfortable journey possible.”

“With wildlife crime having such a devastating impact on many endangered animals, this is an excellent demonstration of successful enforcement work by Border Force and the NCA.

“We are pleased that the criminals involved have been brought to justice and that these critically endangered animals have been returned home to live out their lives in their natural habitat. Wildlife belongs in the wild.”

Border Force is responsible for frontline detection and seizure duties on the illegal trade in endangered animals and plants which is covered by the CITES convention. The convention covers more than 35,000 species of animals and plants, whether they are traded as live specimens or as derivatives.