The grey heron is one of our largest birds, mostly seen at its maximum size when on the ground or in water fishing, with its neck stretched to the full extent. When it is flying, the heron’s wingspan is around two metres and its neck is drawn back towards the body, serpentine-like, though the legs remain extended. It could loosely be 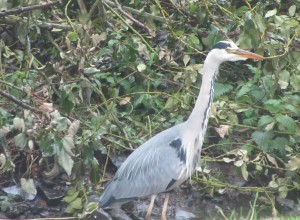 described as a grey bird, but that basic description belies its real beauty. The heron is slate grey over its back but has a white front with a patterned black breast, a white head with a black crown, a bright yellow dagger-like beak and its crowning glory as an adult bird is a long black crest.

Herons can be seen in most of our rivers, lakes, lochs, ponds and right round the shores of the UK. They stand motionless, almost up to the body in water, or stalk almost imperceptibly until an unwary fish, frog or even duckling passes by. They then strike with lightning speed and frightening precision, catching the unwary and unfortunate victim and quickly swallowing it whole. On wet days they can often be seen standing in grass fields, where they are feeding on any invertebrates – or even small rodents – that are enjoying the damp grass.

Herons generally nest in trees, often in small colonies called heronries, and are among the earliest of our nesting birds, beginning in February or early March. Their 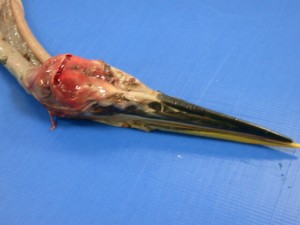 post-mortem – killed by blow to the head with a stick

large stick nest usually holds three or four eggs. It is at this time that the herons need a large food supply and often raid garden ponds for their goldfish or small carp. They sometimes take fish from fish farms, making them unpopular with some of the owners. From time to time police wildlife crime officers investigate reports that herons have been shot, trapped by the leg in spring traps set underwater or even caught under a net covering a pond and whacked over the head by a stick.