Home / How do we prioritise? / Current UK priorities / Poaching (Deer and Fish) and Hare Coursing 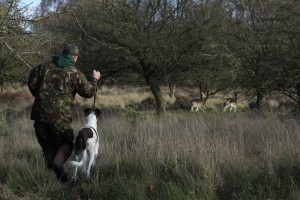 Following the success of Project Trespass, the scheme was relaunched as Project Poacher at the 2015 UK Wildlife Crime Enforcers’ Conference.

Project Poacher is made up of two key elements; advice and support for law enforcers and a free, easy to use app for reporting poaching incidents. The app is available to download at www.projectpoacher.com

Project Poacher will continue to coordinate action across England and Wales through:

The initiative has seen public meetings held across the country involving partner agencies involved with the group, local police and members of the public living and working in the countryside. Magazine articles have been written to raise understanding and encourage the reporting of poaching incidents and police forces have taken direct action running anti-poaching operations gathering intelligence and targeting offenders.

The England and Wales Poaching Priority Delivery Group have developed a series of 3x posters which police forces can use for their own anti-poaching publicity campaigns.  You can download the posters here (Poaching Poster) and your force graphic design departments can attach your own logo before using them for local publicity.

Teenager Aaron Christiansen created the app for reporting poaching as part of Project Poacher. The 15-year-old’s app, created in his spare time, makes it easy to use a mobile phone to report to the police suspicious activities that might be linked to poaching.

The app can be downloaded free on Android, Apple and Windows phones and takes the user step-by-step through creating a report and allows tthem to pinpoint their location using the phone’s GPS.  This data can be sent to the police together with information about the type of incident, vehicles or suspects and any other witnesses; the app also provides extra information about poaching legislation.

The app was launched at the 2015 National Wildlife Crime Enforcers’ Conference where Aaron was presented with an award by the joint chairmen of the Partnership for Action Against Wildlife Crime UK (PAW UK), Chief Constable Simon Prince and John Kilner of Defra.  Click here for full article.

The Poaching PDG’s have a range of members and meet quarterly to tackle poaching and hare coursing across the UK. There is one PDG for England & Wales and one for Scotland. PAW Northern Ireland also have their own Poaching sub-groups.

April 2021: the Poaching PDG for England & Wales announce a new lead and a new secretary. Click here for details.

In 2017, the England & Wales PDG started to produce newsletters. Every issue can be found below:

On 1st October 2013 the Poaching Priority Delivery group (PPDG) launched Project Trespass, an initiative to provide a coordinated response to poaching.  The initiative was relaunched as Project Poacher in November 2015, but past copies of the Project Trespass newsletter can be found below: