Home / How do we prioritise? / Current UK priorities / Badger Crime 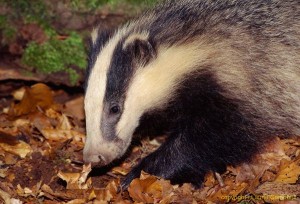 Badger crime is one of the UK Wildlife Crime Priorities and comes in many forms ranging from the horrific practice of badger baiting to the avoidable sett disturbance/destruction which can occur when people carry out otherwise legal operations on land such as forestry or agricultural tasks.

Badger Baiting involves the digging out and killing of badgers in their setts. Dogs wearing radio collars are sent below ground into a badger sett and the radio signal is tracked from above. Once the dog has located a badger the offenders dig down until such time as they reach the dog and badger. The badger is then pulled from the sett and thrown to the dogs which are allowed to kill the animal. Both the dogs and badgers suffer severe injuries often proving fatal to the badger.

Often the dogs do not receive proper veterinary treatment and they suffer terribly as a result. Badgers lucky enough to survive the encounter will obviously go without any kind of treatment for their wounds.

Badgers are killed illegally in many other ways such as snaring, gassing, poisoning, shooting and lamping.

The police, other enforcement agencies and their partners are proactively targeting offenders and seeking information on those who may have involved themselves in criminal activity in relation to badgers and or their setts. The public are urged to act if they have any information on badger baiting activity:

You can report your suspicions on any of the following numbers:

You can also pass information anonymously to Crimestoppers on 0800 555 111 or click here to use the anonymous online form.

Almost 50% of all incidents recorded by Scottish Badgers and the Badger Trust relate to interference with badger setts ~ most of which could be avoided if the persons involved had sought appropriate advice. These types of offences often involve forestry operations, agricultural tasks and other lawful actions such as development of land for building purposes. The unnecessary illegal interference with setts can cause delays to works and can be expensive to resolve if not properly planned. Early identification of a sett where it might come into conflict with your planned legal operations can therefore save time and ultimately money.

If you have identified a problem with a badger sett then there is a plethora of free advice which can be used to stop you getting into a position where you could be facing a criminal investigation. In the first instance contact your local office:

The Persecution of Badgers: A Guide for Investigators in England & Wales

The Badger Trust and Naturewatch Foundation have now produced a publication: ‘The Persecution of Badgers: A Guide for Investigators in England and Wales.’
https://www.badgertrust.org.uk/badger-crime-guide The guide aims to outline the legislation currently in place to protect badgers in England and Wales, and to provide guidance to police forces regarding best practice in the investigation of crimes against badgers and the enforcement of the law. The guide was launched at the 31st UK Wildlife Crime Enforcers Conference in November 2019 by Badger Trust Wildlife Crime Officer, Craig Fellowes, and Naturewatch Foundation Animal Crime Manager, Andrew Swinburne.

The Badger Persecution PDG has a range of members and meets quarterly to tackle badger persecution across the UK.

In 2019, the first newsletter was produced. Issue 1, plus all subsequent issues, can be found here:

Operation Badger is an intelligence-led UK-wide police operation gathering evidence of badger persecution and identifying and targeting offenders with a view to prosecution.  It is supported by Badger Trust, Scottish Badgers, NWCU, local badger groups and police wildlife crime units.

Operation Badger relies on members of the public to play a pivotal role and report incidents where it is suspected that there has been a breach of the Protection of Badgers Act 1992.

INTRODUCTION TO BADGERS AND WILDLIFE CRIME
One day introduction course open to anyone with an interest in badgers.

POLICE BADGER CRIME AWARENESS TRAINING
The Badger Trust provides training to police forces across England and Wales. In 2018 the Badger Trust and Naturewatch Foundation launched the only dedicated wildlife crime training course aimed at tackling one of the wildlife crime priorities and aimed at all Police Forces in England & Wales. The one day Badger Crime Awareness course was launched at no cost to police forces.

Thirty- seven police forces have received the training in some form since its concept with some forces having received more than one course and several are now looking for further training days for new staff. The course is not limited to police officers and several Police Community Support Officers, Special Constables along with Communications Centre staff and CSI have attended the training events.

The aim of the training is to equip police staff with the ability to undertake investigations in relation to the issues and criminality that badgers face in the UK.

Following a difficult year in 2020 where very little training could be delivered safely, the Badger Trust are embarking on the next stage of training to tackle the increasing issue and the persecution priority around badgers. Whilst we are all still faced with some lockdown restrictions the Badger Trust are continuing with the training programme.

In November 2020 the Badger Trust launched the Stop Badger Crime film with Mike Dilger and the valuable support of North Yorkshire Police and RSPCA. The film whilst aimed at the public is a useful aid and helps understand some of the issues: https://youtu.be/PtlMpg5Gl-A

If your force has previously received the course and you would like another or you have not previously received the course, please feel to get in touch and we can discuss options and dates. Usually the course is for a maximum of 25 with ideally a minimum of 10. We would look for you to provide a training room and the location ideally near to or a short drive from a badger sett for a practical exercise. There is no cost for the actual delivery of the course.

If you would like further details and wish to discuss this please get in touch with Craig Fellowes, Badger Trust, Wildlife Crime Officer & Trainer (crime@badgertrust.org.uk).