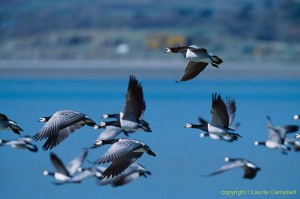 A skein of geese, flying high in the sky in a V formation, is a fantastic autumnal sight as different species of geese make their way from their summer breeding grounds in or near to the Arctic Circle to their wintering grounds in various parts of the UK. Some of the geese, greylag and pink-footed geese, can be legitimately targeted by wildfowlers, mostly in morning flights as they leave their night-time refuge on rivers, lochs and lakes, and head for their feeding grounds. One species that should be safe from the wildfowler though is the barnacle goose, an amber-listed bird that has the full protection of the law and, unless under licence, must not be killed or injured.

There are separate breeding populations of Barnacle geese. The Greenland population winter in the Western Isles, particularly the island of Islay, and in north and west Ireland, whereas the population that breeds in Spitzbergen winter on the Solway Firth. Since they breed in such remote Arctic regions it was once thought that the birds originated from barnacles on driftwood floating on the sea.

The birds are well-known to wildfowlers on their traditional wintering sites and it is possibly when they are on migration and landing and feeding en route that they are at most risk of misidentification. Nevertheless there are relatively few reports of these protected geese being shot. 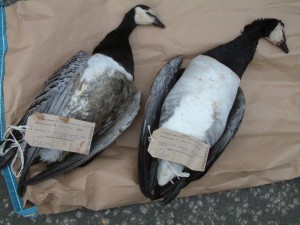 The two Barnacle Geese in the photograph were shot by a foreign visiting shooter in Tayside. The shooter returned to his home country before enforcement action could be taken.