Home / Animal of the Month / Oystercatcher 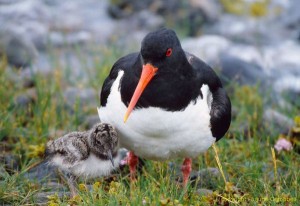 Bird of the month for March is the oystercatcher. They are starting to be heard now in the late evenings and even through the night as they fly in pairs or groups over fields in their pre-breeding displays, loudly piping their call peep peep, peep peep, or kleep kleep, kleep kleep.

The oystercatcher is a smart black and white wading bird with a long bright red bill. This is used to break into shellfish, and each individual inherits a particular technique from its parents. Despite the name, oystercatchers don’t eat oysters though regularly break into mussels and cockles. The long bill is also used to prove into earth and mud to find invertebrates and molluscs.

Oystercatchers are primarily shorebirds, spending much of the winter along the shoreline. Many breed inland, normally in stony fields and in areas of shingle. In some areas they have almost replaced the lapwing as the main wader nesting on farmland. They frequently nest on building sites, with their normal clutch of three eggs running the gauntlet of heavy machinery. Some birds even nest on flat roofs that have been covered with gravel. In one such case the noise made by the parents, alarmed by people walking near the house as the chicks were developing, resulted in an irate resident climbing on to the roof and throwing the chicks to the ground. Needless to say he received a visit from the police and was charged.