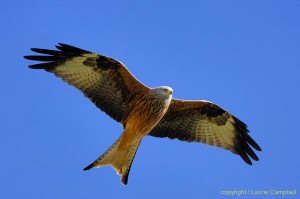 Red kites were once common in the UK, but unfortunately were gradually persecuted to extermination in all of the UK apart from Wales. Since 1989 there has been a series of reintroductions of birds donated by other countries that started in the Chilterns and concluded with a release in 2007 on the perimeter of the city of Aberdeen.

The recent deaths of a large number of kites in Easter Ross in Scotland, through yet more persecution, has made this an appropriate Bird of the Month for April. It is likely that some of these birds would have been paired up or even beginning to nest, so the potential loss to the area’s kite population may be much higher than simply those picked up dead.

Kites have a relatively small beak and small talons, making the bird much more suited to living off carrion. They prefer to feed from sheep or deer carrion, rabbits that have died from disease or from road kill. This carrion-eating habit unfortunately makes them especially susceptible to being poisoned by baits left out in the open. Even if the illegal bait is not meant for a red kite, they, along with buzzards and crows, are likely to be the first to spot it and be lured to their death. 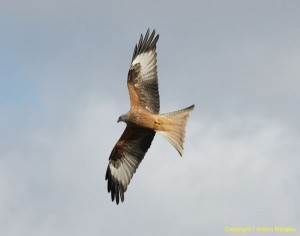 Though red kite numbers are very gradually increasing, we are still far from the stage when almost any visitor to the countryside is likely to encounter one of these beautiful birds. Look out for an elegant and graceful bird of prey with a chestnut-red chest, a wingspan of around 1.7 metres and a long forked tail. Even better if a winter roost or an artificial feeding site can be visited where the birds can be seen in large numbers. They are spectacular birds, which makes their continuing persecution all the more tragic.