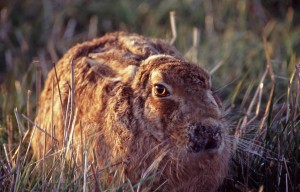 The brown hare is appropriate this month since, as soon as grain fields begin to be harvested in August, much more open space is available to hares. And unfortunately also to hare coursers.

Coursing of brown hares is completely illegal in the UK; in fact if a landowner gives permission to someone to course hares on his or her land that landowner also commits an offense.

Nevertheless it remains one of the most common wildlife crimes across the UK, being carried out by men (extremely uncommon for women to be involved) with lurcher-type dogs.

Normally two dogs are set after a hare, which is invariably left in the field after it is killed. The interest for the dog owners is in how their dog performs, with bets sometimes being taken as to which dog will be faster and more skilful at catching the hare. Sometimes a large gathering of coursers will descend in an area to quickly course several hares, then make off before the police have time to arrive on the scene.

The brown hare is a UK Biodiversity Action Plan (BAP) species, with numbers still well below what the land can support in most areas of the UK. In an important study in 2000 by Stephen Tapper of the Game and Wildlife Conservation Trust he said of brown hares: ‘The species is not threatened; indeed it is more abundant than a number of truly native mammal species not included in the BAP. However, it can be regarded as an important indicator species for the general quality of lowland agricultural habitats. Furthermore, promoting biodiversity is not simply about saving rare species but also ensuring that common species remain common’.

Brown hares breed in almost any month of the year, though their main breeding season is from early February to late August. The average litter is around three, the young being called leverets, but the female may have three litters per year. Unlike rabbits, which are born blind and without any fur, hares are more advanced, being almost miniature versions of the adult, and become independent more quickly than young rabbits. Aside of hare coursers, their main predator is the fox, which takes a considerable number of immature hares, though far fewer adults, since they are so fast and agile. 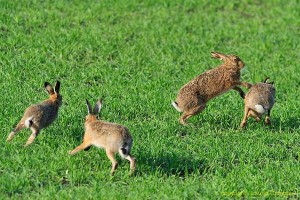 The most interesting months to watch brown hares are March and April, when hares are beginning to mate. Courtship involves ‘boxing’, and this well-known ‘mad March hare’ behaviour is actually unreceptive females fending off passionate males. The males are punched by the front paws of the females, and often receive kicks from the much stronger back legs, which usually results in tufts of fur flying, though seldom causes severe injury. The female may have to fend off three or four potential suitors at the same time. Though hares are mainly nocturnal animals, spending the day lying above ground in a depression in the ground called a form, much of the courtship and boxing takes place during the day.

Scotland now has a close season from 1 February till 30 September, during which brown hares have complete protection apart from when they are causing serious damage and may be killed under a licence issued by Scottish Natural Heritage.