Since the National Wildlife Crime Unit gathers and disseminates intelligence relating to wildlife crime, it seems appropriate for the first ‘Bird of the Month’ to be one of the most beautiful – and arguably the most persecuted – that we have. The hen harrier is a bird of prey living mainly on moorland areas and often comes into conflict with game management as part of its diet consists of grouse chicks. The male and female look completely different, with the male being silver- grey with black wing tips, and the female being dark brown with three dark bands on its tail. They are elegant and graceful birds, flitting moth-like across the top of the heather then suddenly turning and dropping like a stone on top of a vole, mouse or small bird. In the spring the male hen harrier carries out an incredible ‘sky-dancing’ display over the chosen nesting site. In this aerial ballet the male flies up almost vertically, before flipping over backwards and hurtling down again. This is repeated several times, sometimes with mock attacks on the female. When the female is on the nest the male provides her with food. As the male approaches, the female comes off the nest and flies below the male, who drops the food item, which is then neatly caught by the female. 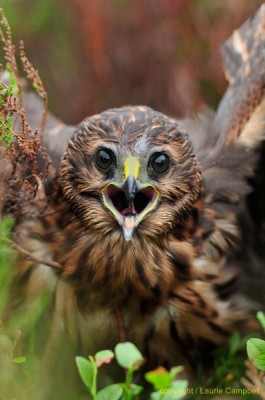 Hen harriers are drawn to managed grouse moors to nest since there is an abundance of prey, and of course a reduced number of mammalian predators such as foxes or stoats as a result of pest-control programmes. It was long suspected that hen harriers were being deliberately disturbed before they nested so that they moved elsewhere. This disturbance was not illegal, but the law was changed on 16 March this year to include the hen harrier on Schedule 1A of the Wildlife and Countryside Act 1981 – birds that may not be harass at any time.

Hardly any hen harriers now breed successfully in England and successful breeding on the east and south of Scotland is poor considering the abundant food supply. There is little doubt that at least part of the cause of falling hen harrier numbers is due to persecution.

To augment the difficulties in enforcing the law in such remote moorland areas, preventive and awareness-raising measures are also being employed. 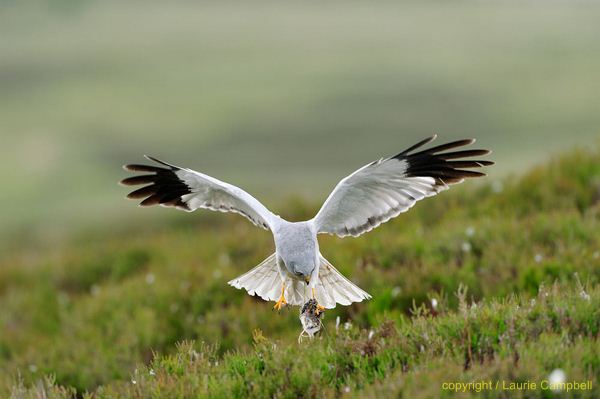 In 2007 the Langholm Moor Demonstration Project was launched, with one of the aims being to ‘seek to demonstrate whether the needs of an economically viable grouse moor can be met alongside the conservation needs of protected raptors, especially the hen harrier’. In April this year PAW Scotland launched ‘Heads up for Harriers’, an initiative urging the public to report sightings of hen harriers. This should help PAW Scotland to build valuable information on these birds, recording what happens to them in order to conserve the species for future generations.