October is the month of roaring in the hills, those roaring being red deer stags at the rut.  Red deer are the largest deer species in the UK, with only the males- stags – growing antlers. The antlers often prove their worth at this time of year when the stags are battling over a harem of hinds, though it is sometimes the weight of the stag that is the deciding factor rather than the number of points on a set of antlers. Strangely this allows the more unusual red deer stags, called hummels, that do not grow antlers, to use their energy putting on weight rather than growing antlers. Even though they are bigger and heavier their lack of antlers puts them at a disadvantage in these jousts over females. 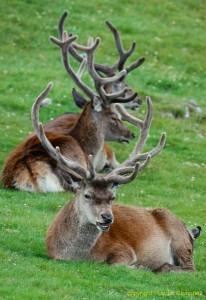 A stag with 12 points to its antlers is called a Royal.  Because in Scotland red deer live for most or all of their life on the hill, eating poorer quality food, only a small proportion ever grow more than 12 points.  Deer living on much better quality grass such as those in deer parks and even those in places in the south of the UK, often grow much larger antlers.

In the mating season – the rut – in late September and October, the stags lose condition fast and only remain in control of a ‘parcel’ of hinds for a relatively short time before they are ousted by a fresher and stronger stag. Occasionally these battles are fatal, with some stags being gored in a place that eventually results in death. Very occasionally during a battle their antlers become jammed and one or both stags may die if there is not human intervention.
Red deer have a hard time during a bad winter and if the winter is prolonged there may be insufficient food for all to survive. With no predators on adult red deer the only option for those weakened animals is death through starvation, usually at the very end of the winter.

Red deer calves are born in June, normally a single spotted calf. The calves lie absolutely still and blend with their surroundings, which is usually a good strategy when danger threatens, though it is not long before they are up and running with the mother. 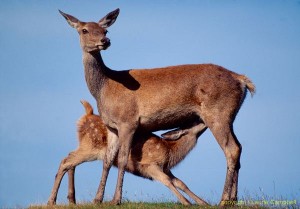 Red deer are regular victims of crime, generally through poaching for profit. This is a major problem in many parts of Scotland, the north of England, south-west of England and in parts of Wales. Shooting from the roadside with a rifle is the main method used by poachers. Sometimes a shotgun is used though this is as likely to injure a deer rather than kill it. More unusual methods are shooting with a crossbow or even snaring.  The police are always keen to hear of outlets for poached venison.