Home / Animal of the Month / Swallow 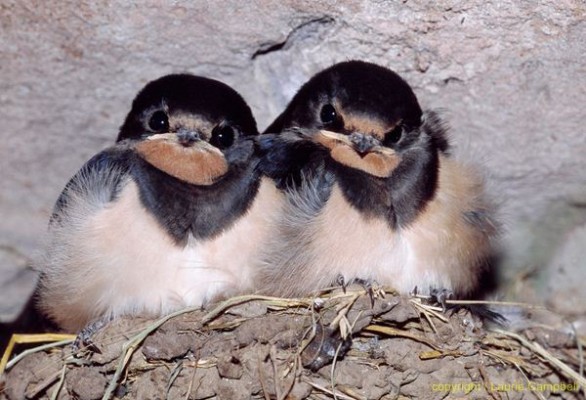 The swallow is probably one of the best known and best loved of our summer visitors. In flight they look black and white but in effect are an iridescent blue-black, with white underparts, a lovely reddish-brown face and a blue-black chest band. Their wings are pointed and the adult birds have long tail feathers, like streamers, at either side of their tail. Swallows are most noticeable when they are perched, possibly on a telephone wire, and twittering their soft trilling song.

Though swallows breed in the UK, they winter in sub-Saharan Africa, making their long and perilous journey here in April. Swallows prefer to nest inside a building, favouring old barns where they build their cup-shaped nest against the rafters. The nest is made of mud – not the easiest material to find in a dry summer – and is lined with feathers and some grass. The female lays 4 to 5 eggs, which are cream coloured with dark brown spots and rather long and narrow. Most pairs will manage to rear two broods of chicks during the summer. It is estimated that a brood of swallows will require around 6000 flies or midges per day. This is an incredible number and the birds do us a great service in reducing midge populations, albeit only slightly. 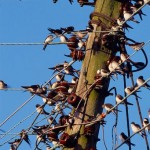 A bird that navigates thousands of miles to breed deserves peace to do so, but unfortunately swallows are sometimes the victims of crime. Calls to police wildlife crime officers are unfortunately not uncommon, with reports that a swallow’s nest with eggs or chicks has been deliberately knocked down because their droppings may be dirtying a car, or horse tack or even wooden floors. Other calls relate to the development or even the demolition of old properties while swallows are nesting inside.

One company, about to remove the roof from and renovate an old property containing 20 pairs of nesting swallows, hurriedly backtracked when advised by a police wildlife crime officer that the penalty for every single egg broken, chick killed or injured or nest destroyed was a fine of £5000 and/or 6 months imprisonment.

Thankfully most people are now much more aware of wildlife and their responsibilities towards wild birds. Nevertheless the swallow remains amber-listed due to population declines across Europe.