Home / Animal of the Month / The Peacock Butterfly

Now it may seem a little strange to have a Butterfly as animal for the Month in November but there are a number of species whose adults hibernate over winter as adults in shelters such as sheds and out-houses. Other species whose adults hibernate include the Red Admiral Vanessa atalanta. So please be careful when moving things around in such buildings as you may find you have a stunning visitor or a number of visitors sheltering in your building. They will be difficult to see as when hibernating as their wings will be folded, showing only the dark camouflage of the underwings. This is in stark contrast to their stunning upper-wing colouration revealing their eye-spots, resembling those on the train of the bird of the same name. The flashing of these eye-spots can be a deterrent to prospective predators such as Birds.

The range of this species had significantly reduced by the early 20th Century but had made a significant comeback by the 1980s. Now its range has expanded well into Central Scotland and appears to continue further north.

Having come out of hibernation, the adults mate in the Spring (March and April) and the females can anything up to 500 eggs on the underside if Nettle leaves. Having a foodplant that provides a sting to other animals is also an advantage in when it comes to avoiding predation. 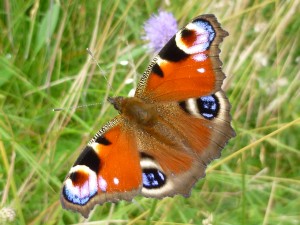 The male Peacock is territorial and will have an area where he will challenge other males whilst pursuing any passing females in order to attract her attention. After a couple of weeks the eggs hatch and it is these infant caterpillars that you see in a large group spinning a web over the leaf in order to feed as a community and with protection. After they have eaten each leaf, they move on and spin a new web.

Once they have fully grown and reached their final instar (the term applied to each moult of skin, which in Butterfly Caterpillars can be as many as 8 times), they will move away from the Nettles to pupate in June or July.

The Peacock adults emerge from the pupae in July or August and then you can see them in fairly large numbers feeding on such plants as Buddleia Buddleja davidii in Gardens whilst Common Ragwort Senecio jacobaea and Hemp-agrimony Eupatorium cannabinum in the Countryside in order to build up energy reserves before going in to hibernation.

Peacocks hibernate in structures such as buildings, hollow trees and wood piles. Today there are even structures that can be commercially purchased for Hibernating Butterflies. If a group of Peacocks are disturbed during hibernation they are capable of producing a hissing sound to deter predators.