White-tailed eagles, sometimes referred to as sea eagles, were exterminated in Scotland in the early part of the 20th century. 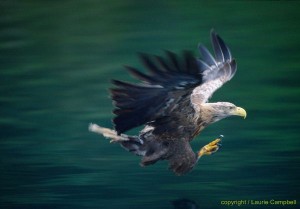 They are magnificent birds, even bigger than the golden eagle. They are distinctive in that they have a huge yellow powerful bill and – at least in adults – a white tail. In flight they have enormous rectangular-looking wings with ‘fingered’ ends.  From wing tip to wing tip they can measure eight feet. They are much less wary of humans than golden eagles and are frequent visitors in places to which golden eagle would never venture, such as low-lying farmland and rural villages.

These magnificent birds were first reintroduced to Scotland in the mid-1970s, on the Isle of Rum. Since that time they have successfully colonised much of the west of Scotland, in particular the Isles of Skye and Mull. Another release of white-tailed eagles recently concluded on the Tay estuary in the east of Scotland, with the birds being donated by Norway. There has also been a release in the south-west of Ireland.  Young eagles travel widely until they establish a breeding territory, with birds from the east of Scotland travelling to the west and vice-versa. Some have even returned to Norway. One nature writer, Jim Crumley, is convinced there is a natural corridor across Scotland for white-tailed eagles from the Tay estuary, following the River Tay, Loch Tay and a series of other freshwater lochs right across to Mull. There have been plenty of sightings in this ‘corridor’ to give this theory credibility. 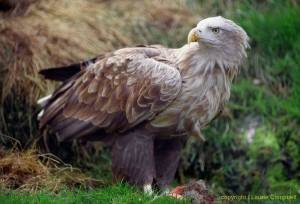 The build-up of successful nesting pairs of white-tailed eagles is slow, since they do not breed until they are around five years old. Though the bird has no natural enemies there are always some deaths through accidental causes, such as a bird hitting a blade in a wind farm or being hit by a train. Unfortunately there have also been many deaths through persecution. Many white-tailed eagles have been poisoned, some have been shot and some have simply disappeared in highly suspicious circumstances. This list of shame even included the very first white-tailed eagle chick fledged in the east of Scotland. This 2013 chick mysteriously disappeared in early 2014, with its last sighting on a grouse moor within the Cairngorms National Park where other birds of prey have found dead in suspicious circumstances. In 2013 in Tayside a tree with a newly-built white-tailed eagle nest was felled.

Another white-tailed eagle chick has fledged this year on the Tay estuary. Let’s hope it survives the five years to breeding age.