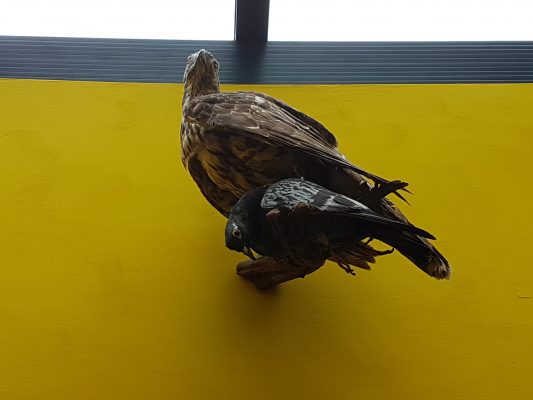 Jacek Oleksiak (42yrs) of Blenheim Drive, Yate, Avon appeared before Bristol Magistrates Court (02/08/2018) and pleaded guilty to 9 offences of prohibited sale of Annex ‘A’ species, and a further charge of fraudulently evading export restrictions in respect to a specimen he exported to the USA without permits.

Between May and June 2017 the owner of a public house in West Yorkshire purchased three taxidermy specimens of Goshawks for display in the pub.  The specimens, which had been advertised separately, were all advertised as being stuffed and mounted pre-1947.  Goshawk is a species that is listed on Annex ‘A’ to the Control of Trade in Endangered Species Regulations 1997 and therefore their sale is prohibited, unless they are covered by a permit, which is commonly known as an Article 10 Certificate.  Taxidermy specimens that were prepared prior to 3rd March 1947 are also exempt under the antiques derogation.

The NWCU identified Oleksiak as the seller.  He had been trading extensively in taxidermy on the internet auction site eBay since 2013.  Officers found that the vast majority of his trade had been legal; however, he had advertised over 90 specimens that were believed to have been included on Annex ‘A’.  Some of the specimens had been re-listed several times because they had not sold initially.  22 of these specimens had actually been sold; all had been advertised as being pre-1947, including the 3 Goshawks that had been recovered.  Officers noted wording in the items’ descriptions, ‘prepared using modern materials and techniques’, which was not consistent with the fact that the specimens were supposed to be antique.   Officers positively identified sales of other Annex ‘A’ species – Eurasian Otter, Sparrowhawk, Common Buzzard, Eurasian Eagle Owl and a further Goshawk.  They also identified the export of a Eurasian Eagle Owl to the USA, which would be prohibited without a valid export permit.

Checks with the Animal and Plant Health Agency confirmed that he hadn’t applied for or been issued with any export permits.  Records indicated that he had previously been issued with Article 10 certificates for Goshawk and Buzzard, however these specimens had been advertised and sold as having permits and had been excluded from the inquiry.

He was subsequently charged with 10 offences, to which he has pleaded guilty.

At Bristol Magistrates Court, he told the court that he now given up any trade in taxidermy, he also said that this trade was legal in his home country of Poland; however, the court was told that the regulations were part of EU law and the same regulations applied in all EU Member States, including Poland.

Magistrates told Oleksiak that they were satisfied that he knew enough about the regulations to know that permits were required. They said that describing specimens as pre-1947, when they clearly weren’t, was a misrepresentation to potential buyers. They told Oleksiak that they been considering a custodial sentence, but took into account his previous good character, his openness with the investigating officers and his early guilty plea.  Oleksiak was given a 12 month Community Order, ordered to carry out 100 hours unpaid work and ordered to pay £170 costs.  Magistrates also ordered the forfeiture of the 3 Goshawks seized by Police.