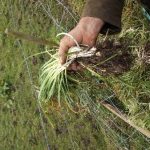 Since 2014 residents of Dalston Village, Cumbria notice large numbers of wild plants were going missing from local woodland. On several occasions witnesses saw a man fitting Adams’s description digging in the area, some witness actually found bin bags containing Snowdrop and Bluebell bulbs near where the man was digging.

Investigations indicated that the man responsible was Adams and on 28th April 2016 officers from Cumbria Police and the National Wildlife Crime Unit executed a search warrant at his home address. Adams immediately admitted that he had been uprooting wild plants for around 2 years. He identified around 5000 bulbs and plants that he said had been illegally uprooted from the wild. He admitted that he was a trader and that he had set up a small business selling plants and bulbs when he had gone bankrupt. During the search officers also recovered invoices indicating that he was trading on Ebay and Amazon.

The plants included Bluebells, Wild Garlic and Snowdrops, which are all protected by the Wildlife and Countryside Act 1981. Snowdrops (Galanthus nivalis) are also included on Annex ‘B’ to the Control of Trade in Endangered Species (Enforcement) Regulations 1997, so can only be sold if they have been legally acquired or lawfully imported. The fact that the bulbs had been illegally removed from the wild meant that their sale would have been prohibited.

Adams was charged with three offences relating to the uprooting of wild plants and one of keeping unlawfully acquired snowdrops for sale. He also admitted that his adverts indicated the plants had been offered for sale as artificially propagated, when they were actually unlawfully uprooted, which resulted in him also being charged with ‘fraud by misrepresentation’ contrary to the Fraud Act 2006.

Adams appeared at Carlisle Magistrates Court on 20th December 2016 where he pleaded guilty to all the charges. Magistrates took into account Adams personal circumstances and his cooperation throughout the investigation and gave him maximum credit for his early guilty plea. He was fined £475 including costs.

All the 5000 bulbs and plants seized from his home were replanted back into the wild by local volunteers.