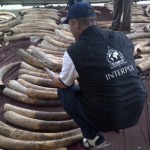 COLOMBO, Sri Lanka – DNA samples from 359 elephant tusks seized in Sri Lanka as part of an illegal consignment, have been taken by a specialist INTERPOL team to assist national authorities determine their origin and potentially identify the criminal networks behind large-scale elephant poaching.

The INTERPOL Investigative Support Team (IST), composed of experts from INTERPOL’s Environmental Crime Programme, DNA Unit, and Command and Coordination Centre provided Sri Lankan authorities with technical assistance and the required equipment to check the tusks which were seized in the Port of Colombo last year on a shipment from Uganda bound for Dubai via 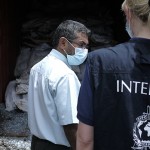 The samples have been sent to the Center for Conservation Biology at the University of Washington in the United States for DNA analysis – to identify the original herd and country – and to the German Federal Agency for Nature Conservation for chemical isotope analysis, to determine their age.

“This collaborative effort sends a strong message to wildlife traffickers that Sri Lanka is taking firm action against the illegal ivory trade. Our cooperation with INTERPOL collecting DNA evidence cannot be underestimated in its long-term consequences for elephant poaching networks, and we look forward to working even more closely with INTERPOL as the investigations continue” said Mr Liyanage, Deputy Director of Sri Lanka Customs.

Once the forensic analysis is completed, results will enable INTERPOL to continue supporting this transnational investigation with the countries of origin in Africa and to coordinate targeted police interventions as part of international efforts

“Environmental fugitives are increasingly transcending national borders, but strong cooperative actions like this helps us close ranks on each one of them” he added.

Poaching and organized wildlife trafficking is a growing transnational crime and the primary threat to the survival of elephants. INTERPOL has created a strong initiative to protect elephants through Project WISDOM, designed to support and enhance governance and law enforcement capacities for elephant conservation.

In December 2012, the European Commission agreed to support INTERPOL in its efforts to combat wildlife crime, under the umbrella of the International Consortium on Combating Wildlife Crime (ICCWC) which also includes the Convention on International Trade in Endangered Species of Wild Fauna and Flora (CITES) Secretariat, the UN Office of Drugs and Crime (UNODC), the World Bank (WB), and the World Customs Organisation (WCO). The INTERPOL Investigative Support Team was deployed under this initiative.