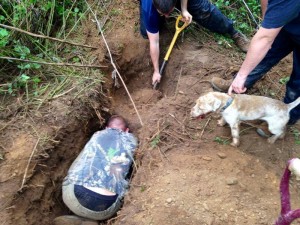 North Wales Police are spearheading a national campaign to clamp down on badger baiting. The campaign, called Operation Badger, is launched this week to target criminals and raise awareness.

The Force says the cruel act of illegal badger digging, still occurs every week throughout the UK.

Sergeant Rob Taylor, who heads the North Wales Police rural crime team, said “This really is an appalling offence involving cruelty to the badger and also the dogs that are used, who usually receive awful facial injuries”.

It is common place for the diggers not to take their dogs for veterinary treatment, due to the fact they will be exposed.

Sgt Taylor added: “We have established a UK week of action with other police forces and agencies, aimed at disrupting this illegal act, with the intention of catching offenders and educating the public on what to look for.

“This really is a deprived act conducted by criminals for their pleasure or money and there are strong links with other criminal activities”.