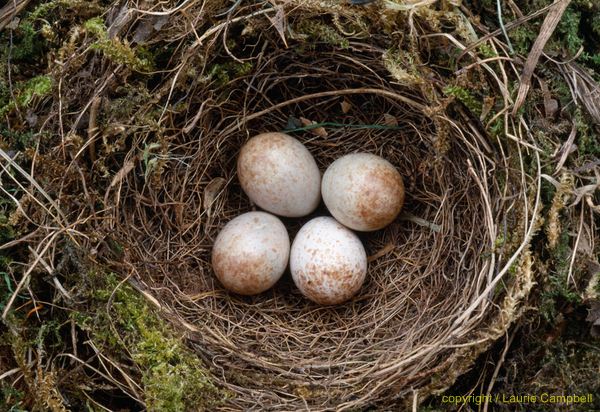 Easter is on the doorstep, birds are nesting, some have already laid eggs, and the national campaign to protect them is now underway. A new element to this year’s operation will  target those who take the eggs or chicks of birds of prey, to sell to illegal falconries.

Collecting wild birds’ eggs is illegal and no longer just a schoolboy hobby.  Egg theft is a serious crime and the police say it remains the pastime of some determined individuals, who take whole clutches of birds’ eggs from some of Scotland’s rarest birds with potentially devastating impacts upon some endangered species. The eggs are then stored in secret collections.

Operation Easter will, for the first time, be run by the National Wildlife Crime Unit (NWCU), based in Livingston, West Lothian. The operation, launched in Scotland 16 years ago, is now UK-wide and Tayside Police, who used to manage it, have handed over responsibility to the Unit.

“Egg collecting continues to pose a very real threat to rare and famous Scottish species such as the osprey, the white-tailed eagle, the peregrine falcon to others such as the less well-known Slavonian grebe and black-throated diver.
“Much progress on stamping out this inexcusable damaging practice has been made in recent years, but some egg thieves are still known to be operating. I welcome the police’s continued crackdown on these wildlife criminals through campaigns like Operation Easter, and I hope that this type of criminal offence can soon be consigned to history.”

“Many bird species are becoming less common for a number of ecological reasons. They can well do without the added pressure of egg thieves and illegal disturbance. The latter is particularly worrying as we are increasingly receiving reports that egg collectors have moved into this area of activity. We will do everything possible to gain good intelligence that brings these wildlife criminals before the court.”

”Operation Easter continues to be an excellent example of multi-agency, partnership working and has achieved considerable success in reducing the theft of the eggs of some of our rarest species. However, as the ongoing case at Inverness Sheriff Court shows, we cannot afford to be complacent. RSPB Scotland welcomes the continued commitment of the police, NWCU and Scottish Government to protecting nests from those criminals who wish to destroy our wildlife.”

PAW Scotland is the Partnership for Action Against Wildlife Crime in Scotland. PAW Scotland partners include a wide range of bodies committed to tackling wildlife crime including conservation, land management, shooting and law enforcement organisations. PAW Scotland defines wildlife crime as any unlawful act or omission, which affects any wild creature, plant or habitat, in Scotland.
The police are also appealing for help from the public. If you have information on any wild bird’s egg thieves, or those who disturb rare nesting birds without a licence, you should contact your local or nearest police station by dialling 101 and ask to speak to a wildlife crime officer if possible. Nesting will be in full swing by Easter so please contact the police if you see anyone acting suspiciously around nesting birds, particularly those that nest in colonies.

Information can also be passed in confidence to Crimestoppers at 0800 555 111.