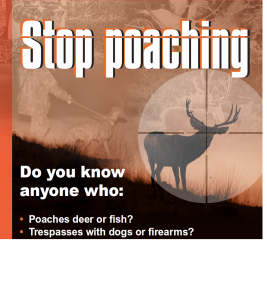 Police teams across Devon and Cornwall are asking for the public’s help to report poachers in rural areas of the region with the launch of the campaign ‘Stop Poaching’.

The last few years have shown it is not about the lone poacher taking something home for his larder, but an organised operation where deer, fish and livestock end up in the food chain, via restaurants, hotels or meat suppliers.

Environmental contamination can occur as a result of unhygienic processing by people operating outside of the legal obligations. A number of potential health risks have been associated with wild venison such as Tuberculosis and E.coli.

“Those who are making profit from poaching and livestock theft are making landowners lives a misery. These people are in it for financial gain and linked to other types of criminality. Members of the public now have an opportunity to report these criminals.

We have heard of poachers trespassing and then shooting or using dogs to take deer and threatening landowners. By working together we are looking beyond where the Police have traditionally looked to stop this crime occurring.

Ultimately the poacher is making his financial gain somewhere and this is where we will be looking next. We also want to know where this meat is going, where it is being butchered and stored, who is buying it and where it is being sold. In some circumstances there may be a cash reward.”

The south west Anti-Poaching group is a great example how agencies are now working together. The group share information and intelligence on those involved and identifying people involved.

The group is made up of government agencies including Avon and Somerset and Devon and Cornwall Police, Food Standards Agency, National Food Crime Unit, Trading Standards, various Environmental Heath Officers from the south west, Environment Agency, Animal and Plant Health Agency and Crimestoppers.

If you noticed anything suspicious in your area you can call Crimestoppers anonymously on 0800 555 111 FREE. Alternatively you can call 101 or, in an emergency, call 999.