The United Kingdom played a major part in the success of Project PREDATOR and Operation PREY in particular. This was based upon three elements coordinated by the National Wildlife Crime Unit:

The UK was invited to support one of the Tiger range states taking part in the operation. 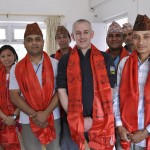 Working with INTERPOL, the NWCU identified Nepal as a country that would prove beneficial to work with.  Police Constable Paul Barr, an experienced Wildlife & Environmental Crime Officer for the Loch Lomond & Trossachs National Park with Police Scotland attended Kathmandu and worked closely in support of operational activity with Police Officers from the Central Investigation Bureau (CIB) (pictured).

During his week in Nepal, Paul worked to raise awareness of the operational planning processes used in the UK on targeted Police operations. He was invited to attend an 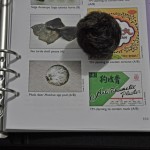 operational deployment aimed at tackling illegal trade when officers from CIB acted upon information in relation to the offering a musk pod for sale. As a result a man and a woman were arrested and a pod of the musk deer was seized. They were charged and later convicted of illegal trade offences. 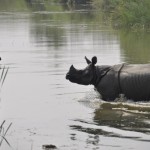 In addition during his time in Nepal two Indian poachers were detained by members of the Anti-Poaching Unit at Chitwan National Park. Both were wanted for the poaching of a Rhino in Chitwan National Park seven years ago and one of the males was also wanted by authorities in India in relation to Tiger poaching.

Following this initial operation INTERPOL identified the need for intelligence based training for representatives from all of the Tiger range states. The NWCU was invited to share in the delivery of this training:

Helen Bulmer, an Intelligence Officer with the NWCU attended the course and jointly delivered specific intelligence-based training to representatives from 10 Tiger range state countries with colleagues from Canadian and Nepalese law enforcement agencies.

Training focused on the security and integrity of criminal intelligence and how it can best be utilised to support effective law enforcement. It also encouraged communicating that data and sharing where necessary with law enforcement, government and non-government agencies alike as well as promoting joint investigation where possible.

UK best practice documents were also designed and circulated to all representatives as a starting point for adopting a more robust and secure intelligence approach.

This was done in anticipation of a further phase of Operation PREY and the UK was again asked to provide support to this in March 2013:

Detective Inspector Sue Bradshaw, the Force Wildlife Crime Coordinator for Gloucestershire Police joined the Central Investigation Bureau (CIB) Nepal Police to assist in capacity building in Nepal in the next phase of the operation.

The operation’s objectives were built around developing multi-disciplinary exercises in order to gather data, information, intelligence and evidence leading to the prosecution of significant individuals engaged in the illicit exploitation of tigers.

Amongst other objectives it aimed to build wildlife law enforcement capacity nationally and regionally and to enhance international communication in a globalised, dynamic environment. 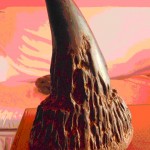 During the week of Sue’s deployment the CIB were actively pursuing a number of lines of enquiries and gathering information. As a result an undercover operation was mounted and 4 men were arrested for trying to sell a rhino horn (pictured) near to Chitwan National Park. The Rhino horn was seized and found to be fake. Some market estimates for Fake Rhino horns can be as much as USD 15,000 per kilo. 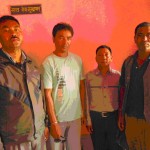 These men (pictured) were later charged and convicted.

UK law enforcement support to PROJECT PREDATOR was financed via Defra support to INTERPOL. As a result of the activity undertaken significant progress was achieved in support of law enforcement at tactical and strategic levels and has been recognised by INTERPOL in its report that was launched today.  To see the INTERPOL press release, click HERE.