Woman sentenced by Met Police for trading in Tiger skin 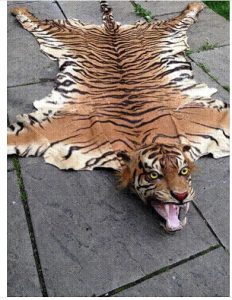 A woman has been sentenced at Highbury Corner Magistrates’ Court for trading in endangered species without certification.

She was further sentenced to 180 hours of unpaid work and given a £685 fine.

She pleaded guilty on 8 September to offences under the Control of Trade in Endangered Species (Enforcement) Regulations 1997 and making a false statement in order to obtain a certificate permitting the trade/sale of a tiger skin.

Officers from the Met’s Wildlife Crime Unit came across a sales advertisement for a ‘Javan’ Tiger Skin rug on an online auction site under the seller name of ‘Mr Muffins Tiny Shop.’

To be considered an antique, and therefore saleable without a certificate, the tiger used to make the rug would need to have been killed prior to 1947. The tiger skin rug appeared to be in far better condition than would have been expected of such an old item.

A warrant was obtained from Highbury Corner Magistrates’ Court to search Vaitkeviciute’s home address at that time in Mark Road, Haringey. The warrant was executed on 23rd May 2014 and several Control of Trade in Endangered Species listed skins were seized for subsequent examination by a Defra (Department for Environment, Food and Rural Affairs) appointed Wildlife Inspector.

Ms Vaitkeviciute was aware of the necessity for certification and had previously obtained certificates allowing her to trade in specific items.

The Defra Wildlife Inspector was of the opinion that the ‘Javan’ Tiger skin rug had been created after 1947. Vaitkeviciute continued to dispute this and the skin was subsequently radio carbon dated which showed that the tiger had in fact been killed in the late 1970s, more than a quarter of a century beyond the acceptable time boundary for trade in endangered animal skins.

During the course of the investigation, Vaitkeviciute offered a further tiger skin rug for sale online and suggested it may be a ‘Bali’ Tiger. She claimed that she had not ‘bought’ the skin, but that it had been a gift from someone in Italy. She also claimed that it was made prior to 1947.

However, a Wildlife Inspector examined the skin and was of the opinion that the animal had been killed after 1947.

Wildlife Crime Unit detectives made enquiries with the online market place and discovered that Vaitkeviciute had in fact paid £2,500 for the skin and had therefore provided false information to the UK Management Authority (Animal and Plant Health Agency) in relation to the import of the item. She was therefore also charged with making a false statement in order to obtain a certificate.

“There are guidelines for dealers in endangered species and in some cases it is clear that the dealers are aware of the regulations but take the decision to disregard them for financial gain.

*The Met’s Wildlife Crime Unit applied for funding from the DEFRA / Partnership Against Wildlife Crime Forensic Analysis Fund. Without the advantage of this funding, many wildlife cases that make use of forensic analysis would fail to reach prosecution.”