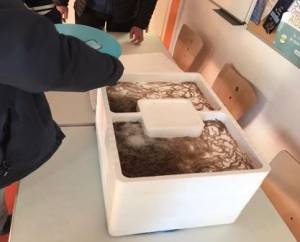 Operation Lake targets the trafficking of the protected European glass eel, one of the most devastating crimes against wildlife worldwide. While the European eel (Anguilla anguilla) population has decreased by 90 % in recent years, persistent law enforcement activities against eel trafficking could be partly responsible for preventing the species from being wiped out entirely.

The trafficking of glass eels is one of the most substantial and lucrative illegal trades of protected species worldwide, with illegal profits estimated to be up to EUR 3 billion in peak years. Successful law enforcement efforts in combating this threat to European wildlife have made a big contribution to the significant decrease in illegal activity: estimates show that incidents involving the trafficking of eels have fallen by 50 % since 2016, the year after Operation Lake was launched. Since then, more than 500 individuals have been arrested and 18 tonnes of glass eels have been prevented from being smuggled and returned to their natural habitats.

The recent relaxation of Covid-19 travel restrictions allowed for the return of the practice of smuggling glass eels out of EU borders in passengers’ baggage. This had been the main approach to illegally exporting the young eels out of Europe before the pandemic and had shifted to concealing glass eels in shipments with other commodities during the period of travel restrictions. Organised crime groups rely on human mules with suitcases using a sophisticated method to keep the glass eels alive for up to 48 hours.

Several criminal networks are responsible for trafficking these fish from Europe to Asia. Within these criminal networks, EU nationals are mainly responsible for the illegal fishing while nationals from the destination countries in Asia arrange logistics and transportation. In certain cases, glass eels are bought from poachers; in others, legally fished glass eels are deviated to illegal markets using cargo declared to customs authorities as other commodities and camouflaged to trick the scanners.

Once the eels arrive in Asia, they are grown in fish farms and then distributed to different markets around the globe. The trade in glass eels, regarded as a delicacy in many Asian countries, is one of the most impactful forms of wildlife trafficking worldwide. It is suspected that around 100 tonnes of glass eels may be smuggled annually from the countries of the European Union, with prices reaching staggering numbers of up to several thousand euros per kilo.

Europol coordinated the operational activities, facilitated the information exchange and provided analytical support to national law enforcement authorities. During the actions days, Europol deployed experts to Spain, France, Portugal and the Netherlands to cross-check operational information against Europol’s databases in real time and provide leads to investigators in the field.