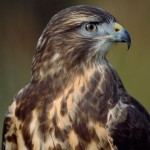 Greater Manchester Police and the RSPB are appealing for information after a buzzard was found shot near Diggle, in the Peak District National Park, on May 11.

A member of the public found the bird dying on the ground and contacted the RSPB. However it had to be euthanised by a vet the next morning due to the extent of its injuries.

The body of the bird was x-rayed, and found to contain six pieces of lead shot. Further post-mortem analysis revealed that the bird had also been shot at an earlier occasion, but survived.

All birds of prey are protected by the Wildlife and Countryside Act 1981. To intentionally kill or injure one is a criminal offence and could result in an unlimited fine or up to six months in jail.