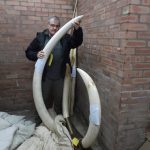 Andy McWilliam (NWCU) with the Elephant Tusks that Halstead was trying to sell. At over 2 metres in length, the large tusk is believed to be one of the largest ever seized in the UK – Credit: NWCU

A taxidermy dealer who illegally traded in critically endangered species has been sentenced at Preston Crown Court to a total of 56 weeks in custody.   The sentence is the result of complex two-and-a-half-year investigation.

In December 2017 the UK National Wildlife Crime Unit and Lancashire Police launched a joint investigation into the dealings of Arron Halstead after being alerted to the fact that he offered to sell a black rhino skull, a sawfish rostrum and a sperm whale tooth without the required permits.  Halstead had been well aware of the legal status of the species involved and the fact that permits were required to sell them and had suggested methods of evading detection.

As a result, in January 2018 officers executed search warrants at the 29-year-old’s home address and business address in Burnley as part of Operation Rambler. Officers seized a wide range of taxidermy related items including stuffed Tiger cubs, Rhino horns, Rhino heads and three Elephant tusks, which included one in excess of 2 metres in length that is understood to be one of the largest ever seized in the UK.  Other items included the Rhino skull, Sperm whale tooth and the Sawfish rostrum that Halstead had offered to sell. Officers also seized a mass of paperwork related to his trade in taxidermy.

It was clear to the investigating officers that Halstead was trading legally in many taxidermy specimens but they suspected he was using his legal trade to front his criminal activity. Following the warrant Halstead was arrested and interviewed by the officers from NWCU and Lancashire Police.  He declined to provide any provenance of explanations for any of the seized items.  One of the only things Halstead acknowledge was that one particular file contained details of all his trade for 2017 which he had compiled for his accountant.  Officers were aware that tens of thousands of pounds worth of sales were not included in those records which added to their suspicions.

Officers undertook a painstaking analysis of the paperwork and the data downloaded from Halstead’s phone and uncovered WhatsApp messages showing that he had been trading extensively in taxidermy.

Although the majority of his trading had been legal officers found comprehensive evidence showing that Halstead was also involved in an illicit trade with dealers from around the globe which he was trying to hide amongst his legal dealing. 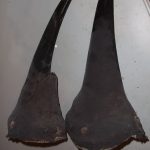 Black Rhino horns discovered in Halstead’s freezer that he was trying to sell to Chinese buyers – Credit: NWCU

Halstead had used contacts in Spain to broker the sale of rhino horns to buyers from China.  Falsifying documentation for a cover story he drove to Calais twice where he met the buyers and sold four rhino horns for significant amounts of cash.  Two trips to Calais had netted Halstead in excess of 70k Euros, plus £2000 in expenses.

At the time of the warrant Halstead was arranging to sell two more horns which officers found in his freezer. They also uncovered messages indicating the Halstead was actively trying to source further Rhino horns which he intended to sell to his Chinese contacts and messages showing that he was trying to find buyers for Elephant tusks.

Documentation pointed officers in the direction of a witness who had inherited three elephant tusks.  Halstead had told the witness that he would not be able to sell the tusks and persuaded him to donate them to him so he could display them in his house.  The messages clearly show that Halstead intended to sell the tusks on the black market.

As the investigation progressed Halstead’s activities also attracted the attention of Interpol and the Dutch Police. That was after officers found that Halstead had acquired tiger skulls from another dealer based in the Netherlands which he was selling to other contacts. 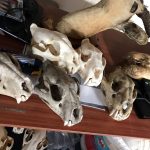 Part 1 of the illegal shipment of 10 skulls, including Tiger that Halstead received from Netherlands

Other messages indicated that HALSTEAD was acquiring and selling Tiger teeth to other buyers.

Initially Halstead pleaded guilty to the prohibited offering for sale a Rhino skull, Sperm whale tooth and Sawfish rostrum and entered not guilty pleas to all other charges so the case was listed for trial.  However, at Preston Crown Court on 23rd June 2020 Halstead entered guilty pleas to a further six offences contrary to the Control of Trade in Endangered Species (Enforcement) 1997.  These related to the prohibited trade in Tiger skulls, Elephant tusks and Rhino horns – some of the world’s most critically endangered species.

This is the third occasion that Halstead has come to the attention of the Police and National Wildlife Crime Unit.  In December 2015 Halstead was given a 24-week prison sentence for the prohibited trade in other endangered species.  In fact, he is believed to be the first person in the UK to be imprisoned twice for offences under the regulations.

His Honour Judge Altham, The Recorder of Preston, told Halstead that he was not a hapless amateur, but a person that was extremely familiar with the law, which he had flagrantly disregarded.  He told Halstead that he was a highly organised individual who was involved in an illegal trade on an international scale.  He said that he had undertaken the detailed planning and used his legal trading to mask his criminality.  Halstead was told that his offending was so serious that an immediate custodial sentence was the option. 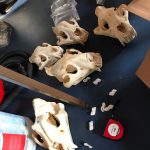 Part 2 of the illegal shipment of 10 skulls, including Tiger that Halstead received from Netherlands

A timetable was put in place for future hearings to consider Confiscation Orders and an application for a Serious Crime Prevention Order.

Andy McWilliam, an Investigative Support Officer with the National Wildlife Crime Unit, said, “This is the third occasion that I have dealt with Halstead for similar offences in under 10 years. He is an extremely knowledgeable individual but sadly his main concern is profit.  He is well aware that some of the species he profits from are threatened with extinction. He is also aware that these species are protected by international law.  He knows that he is feeding a demand and that his illicit trading may have a direct impact on the survival of some of the world’s most threatened species. The sentence imposed on Halstead should be a warning to anybody who chooses to trade illegally in endangered species “.

Chief Inspector Lou Hubble OBE, Head of NWCU said, “This has been a particularly lengthy and complex investigation.  Halstead appears to be motivated purely by profit with little, if any, regard for the conservation status of the species he was trading in.  I wish to acknowledge and thank all who were involved in this investigation for their determination and tenacity in bringing Halstead to justice.  The sentence reflects the severity of the crimes and sends a clear message that the illegal trade in endangered species will not be tolerated.”