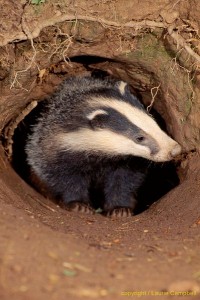 A Carlisle man who used a shovel to “bludgeon” a badger before tossing the terrified animal to his dog has been jailed [17th December 2022].

The horrific badger baiting incident near to Aglionby was conducted primarily by 28-year-old Dale Rickerby, but he was assisted by his older brother Michael James Rickerby, 32, who was given a suspended jail term. The brothers, of Warnell Drive, Harraby, denied any wrongdoing, claiming the badger attacked Michael Rickerby’s bull lurcher Bronson, which suffered painful facial injuries as the terrified animal fought for its life. The Rickerby brothers denied the offence despite evidence that they had dug a deep hole to give their dog access to the badger in its sett.

During an all-day trial at the city’s Rickergate court, RSPCA prosecutor Steven Marsh described how police were able to identify the brothers after the badger was killed in the Holme Lane area of Aglionby on October 15 2021.

Tracking devices were used by those involved so that the location of the dogs underground could be pinpointed prior to holes being dug.

Dale Rickerby claimed he and his brother were in the area “legally” hunting for rabbits when they happened to see the badger, which he claimed attacked their bull lurcher. He said he used the shovel on the badger to “protect” his dog.

But the trial heard from witnesses which supported the prosecution case that the men were involved in ‘digging out’ the badger from the sett where it was living. Both men were convicted of illegally and wilfully killing the animal.

Dale Rickerby was also convicted of two additional offences, committed on the same day and in the same place. The first of these was causing ‘unnecessary suffering’ to a protected animal, namely the bull lurcher type dog called Bronson by setting it on to the badger; while the second offence was failing to ensure the welfare of the dog. He did this, the court heard, by failing to take reasonable steps to protect the dog from pain, suffering and injury in its encounters with other animals. The judge jailed the defendant for 20 weeks. He also imposed an order transferring ownership of Bronson to the RSPCA.

Dale Rickerby will be banned from owning or looking after any animal for five years. When released, he must pay £500 prosecution costs.

Turning to Michael Rickerby, the judge said he had “encouraged and aided” his brother, with this including him driving another member of the group away from the scene with some of the dogs they had brought. The judge imposed 12 weeks jail, suspended for a year. Michael Rickerby must complete 200 hours of unpaid work and pay £1,000 prosecution costs. He was banned from owning or caring for any dog for five years.