“Colin Burne, of Winters Park, Penrith, has today pleaded guilty to the intentional killing of buzzards on land managed by a private shooting syndicate in Whinfell Forest, near Penrith, Cumbria.

The 64-year old gamekeeper attended Carlisle Magistrates Court today where he pleaded guilty to three charges. These related to the killing of two buzzards on the 11 February 2013, killing five buzzards prior to this date and possession of a wooden stick as an item capable of being used to kill the birds.

He received a 70-day jail sentence, concurrent on each charge, suspended for 12 months.  In sentencing, the Judge stated that had it not been for his ill health he would have considered jailing him.”

Covert RSPB footage shows Colin Burne entering the trap and intentionally killing two buzzards by beating them to death with a wooden stick. Click here to see the video footage.

Warning: this video contains graphic scenes and should be viewed with caution.

RSPB have also supplied the photographs below:

Second buzzard being clubbed to death

First buzzard being clubbed to death 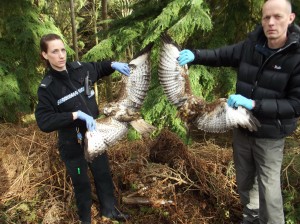 One of killed buzzards being placed in bucket for disposal