New online tools aim to save endangered animals, but experts say there are no easy shortcuts. 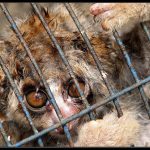 In a few small, cramped crates, 19 slow lorises were about to be shipped far from their rainforest home in West Java, Indonesia — if they didn’t die from stress along the way. The online buyers had confirmed the deal.

Fortunately, local officers tracked down the black-market trafficker and rescued the wide-eyed nocturnal primates. “We are sending a strong message to all online traders of wildlife that law enforcement does not tolerate such cases of illegal wildlife trade,” said Achmad Pribadi, an Indonesian forestry official, in a news story on the successful raid.

It was a rare victory in a conflict that seems to be getting worse all the time. A global report from the International Fund for Animal Welfare (IFAW) identified more than 30,000 live wild animals or animal parts for sale in 280 online marketplaces in 16 countries — and that was only during a six-week period of research in 2014.

“That’s just a tiny tiny snapshot of the true scale of online wildlife trade,” says Tania McCrea-Steele, who leads IFAW’s global wildlife cybercrime project. “Multiply that by all the countries of the world, over 190 countries, and you can imagine the trade is huge.” So huge, in fact, that it generates about $19 billion in revenue each year, according to the same report.

Source: Scienceline (The Shortest Distance Between You and Science)