Russell Oxley  (52yrs) a professional taxidermist from Ilkeston, Derbyshire appeared at Nottingham Crown Court  on 4th May 2021 where he pleaded guilty to offences relating to the prohibited purchase and offering for sale of the skull and horns of six Gaur Bison, also known as an Indian Bison (Annex ‘A’ species). Oxley was fined £1,000 and £1,100 costs, all the skulls and horns were forfeited. Two further charges of purchasing and keeping for sale remained on file.

In August 2018, officers from the UK National Wildlife Crime Unit were alerted to various items being advertised on an internet site trading in taxidermy items, these included adverts for three Bison skull and horns.

The commercial use of Annex ‘A’ species and any parts or derivatives is strictly controlled and can only be purchased or sold if there is an exemption certificate in force, commonly known as an Article 10 Certificate.  Antique taxidermy specimens that were worked prior to 1947 are exempt from the requirement for a permit, although this would not apply to an un-worked skull.  The seller of the Gaur Bison skull and horns would have required an Article 10 Certificate irrespective of its age. Officers were able to identify Oxley as the seller.

On 3rd September 2018 officers from NWCU, Derbyshire Police and an APHA Wildlife Inspector executed a search warrant at Oxley’s home address and seized various items, including six Gaur Bison skull and horns. When interviewed, Oxley admitted purchasing the six skulls and listing three of them for sale. He said that he had made a mistake and believed that they did not require A10’s as they were not an Annex A listed species. Checks carried out with APHA confirmed that OXLEY had not applied for or had been issued with any A10’s enabling him to commercially trade in these items. These checks and information gained during the investigation showed clearly that Oxley regularly traded in CITES listed species and had a good understanding of both the identification of species and their requirements under the relevant legislation. 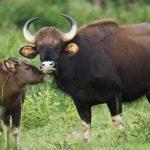 Ian Guildford from the National Wildlife Crime Unit said: “Mr Oxley was obviously a trader in these items and had an excellent knowledge of both species identification and the legislation put in place to protect them. The reason the legislation and controls are in place is to protect and conserve some of the world’s most endangered species and compliance is not an option but essential to ensure their survival, anybody trading in these species must understand these requirements and comply with them.”

The NWCU would like to thank Derbyshire police and APHA for their assistance in the case.