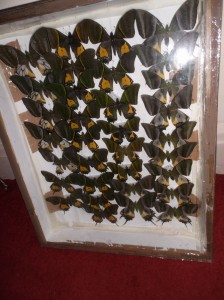 Some of the butterflies seized during the search © NWCU

Wildlife crime officers from South Yorkshire Police and the National Wildlife Crime Unit investigating the illegal trade in endangered species have seized around 100x endangered species of butterflies from a house in the Barnsley area.  Officers had identified man who was trading illegally on the internet and as a result they executed a search warrant issued under the provisions of the Control of Trade in Endangered Species (Enforcement) Regulations 1997, on Wednesday 30th March 2016.  Officers found a large collection of between 3000 and 4000 butterflies.  The vast majority of the collection was quite legal.   However, amongst the collection officers found and seized specially protected species that had been illegally imported from China, Vietnam and Costa Rica.  The seized species included Birdwing and Swallowtail butterflies.

A 51-year-old man was interviewed and later cautioned for the prohibited sale of protected species.

NWCU note:  There are over 20 species of butterfly that are listed on the appendices to the Convention of International Trade in Endangered Species of wild fauna and flora (CITES).  CITES species can only be legally imported into the EU if there is a valid import permit.  It is the importer’s responsibility to ensure that there is a valid import permit in place before such specimens are imported.  Only specimens that have been legally acquired from the wild and legally imported can be traded.