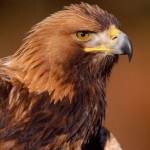 Almost a third of golden eagles being tracked by satellite died in suspicious circumstances, scientists have found.

The Scottish Natural Heritage (SNH) research identified that the majority of cases were found where land is intensively managed for driven grouse shooting.

Environment Secretary Roseanna Cunningham confirmed to the Scottish Parliament she will now set up an expert group to look at managing grouse moors sustainably and within the law.  Following a request by the Environment, Climate Change and Land Reform Committee the group will also advise on the option of licensing grouse shooting businesses.

The report studied the movements of 131 young golden eagles over a 12 year period, and found more than 40 had disappeared in suspicious circumstances. It also found there was no link between fitting satellite tags and the disappearance of the birds of prey and ruled out any connection with the position of wind turbines.

In response Ms Cunningham outlined a package of new measures designed to protect birds of prey, the wider Scottish environment and the reputation of those who abide by the law. The Scottish Government will:

• Set up an independently-led group to look at the environmental impact of grouse moor management practices such as muirburn, the use of medicated grit and mountain hare culls, and to recommend options for regulation including licensing and other measures which could be put in place without new primary legislation;
• Immediately review all available legal measures which could be used to target geographical areas of concern;
• Increase resources for the detection and investigation of wildlife crime and work with Police Scotland to pilot the use of special constables in the Cairngorms National Park;
• Rule out giving the Scottish SPCA more investigative powers, in light of legal advice;
• Examine how best to protect the valuable role of gamekeepers in rural Scotland;
• Commission research into the costs and benefits of large shooting estates to Scotland’s economy and biodiversity.

To read the 2017 SNH report on the analysis of the fates of satellite tracked golden eagles in Scotland, click here.