“A falconry owner who illegally displayed and sold numerous birds of prey has been fined more than £1,000, ordered to undertake 200 hours 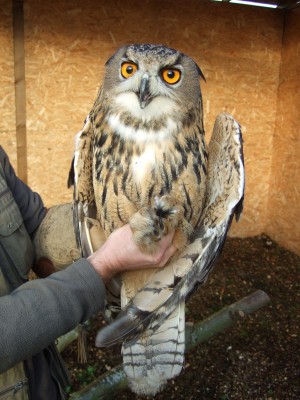 unpaid work and given a six week curfew.

Andrew McManus-Dunkley, owner of the Banwell Falconry in Smallway, near Congresbury, was found guilty of illegally displaying birds of prey for commercial gain which included a buzzard, barn owl, a tawny owl and three eagle owls.

He was convicted of illegally offering to sell two more owls and lying about the correct documents whilst selling another bird and the non-registration of a peregrine falcon when he appeared before North Somerset Magistrates Court during a two day trial which concluded on Tuesday, October 22, 2013.

Magistrates said they regarded McManus-Dunkley’s offences as serious before sentencing him to 200 hours of unpaid work and ordering him to comply with a six week curfew. He was ordered to pay £1,160 costs and £150 compensation to the owner of the eagle owl he attempted to defraud.”