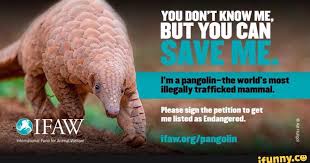 Today the NWCU are joining animal lovers all over the world to celebrate one of the most unusual animals in the world: the pangolin!

Pangolins are scale-covered, ant-eating mammals known for their body-length tongues and the ability to roll up into an impenetrable ball when threatened.

But while pangolins are great at defending against lion claws and tiger teeth, they are easy prey for the worst predator: humans. Tragically, Pangolins are the most poached and illegally traded mammal in the world; scientists estimate that over 1 million animals have been killed in the last 10 years for that purpose.

Pangolins are prized for their meat and scales in parts of Asia. The scales are used in traditional medicine, while pangolin meat is the ultimate status symbol. Just one small animal can fetch thousands of dollars.

It is no wonder poachers are taking these innocent animals from the wild at an ever-increasing pace. Pangolins are relatively slow to reproduce, and the rate at which they are being killed for their parts is completely unsustainable. 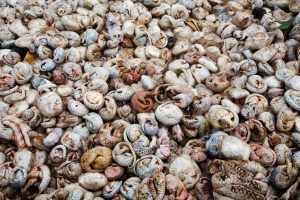 If nothing is done, we could see their extinction within a generation.

On this World Pangolin Day, let’s bring awareness to not only the plight of the animals, but also the amazing work being done across the world to stem the tide.

Dedicated scientists are working in Africa and Asia, where the pangolins live, to better understand their habitat and biology. Amazing groups like Tikki Hywood Trust in Zimbabwe and Save Vietnams Wildlife in Vietnam are rehabilitating pangolins seized from smugglers and getting them ready to get back in the wild where they belong.

IFAW is working with other animal conservation groups to improve international and national laws and policy. In 2015 IFAW led a coalition of NGOs to submit a petition to list all eight pangolin species as “Endangered” under the U.S. Endangered Species Act. They also participated in the first ever Pangolin Range State Meeting in Vietnam, which brought together countries and animal conservation groups dedicated to finding solutions for the pangolin. 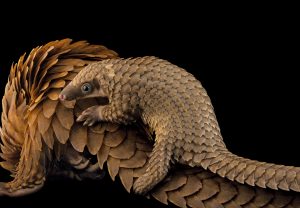 So on this World Pangolin Day, let’s celebrate this amazing animal.