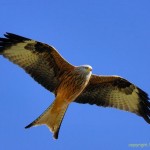 Police have launched an investigation after a bird of prey was found poisoned to death near Peterborough.

Last year a Red Kite was found dead by a member of the public on a piece of land in the Crowland area.

The bird was sent off for forensic toxicology tests through the government Wildlife Incident Investigation Scheme (WIIS). The result of this analysis has been returned to Lincolnshire Police and indicates that the bird was poisoned.

Following this result, Lincolnshire Police Wildlife Crime officers, along with partner agencies including the National Wildlife Crime Unit (NWCU), Natural England and the RSPB, have been involved in a detailed investigation and two searches have been carried out at addresses in the Crowland area under the Wildlife and Countryside Act 1981.

During these searches, items have been recovered which are believed to have been linked to this offence, including some suspected banned pesticides. Investigations are ongoing and two people have been identified in relation to this and they will be spoken with in due course.

Detective Constable Aaron Flint, Officer in the case has said: “Raptor Persecution is one of the UK’s National wildlife crime priorities and is taken very seriously by Lincolnshire Police. These offences will always be dealt with expeditiously and robustly. Deliberate killing of birds of prey is an offence which I urge the public to report if they become aware of it.

“I would like to add, that if a bird of prey is found dead and you believe it is suspicious it should be reported to the police immediately to allow an investigation into its death to commence. The bird may have been poisoned which poses obvious health and safety concerns if handled. Providing the police with the What3words location would be extremely useful when reporting an incident”.