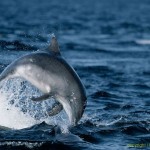 A man has been sentenced after he was prosecuted for disturbing dolphins off the North Yorkshire coast.

On 9 July 2021 Christopher Barker, 45, from Brompton-by-Sawdon, was seen to drive his high-powered speedboat numerous times around a pod of bottlenose dolphins feeding close to the shore off Scarborough’s South Bay.

His actions – described by one witness as “corralling” – caused the animals to panic and resulted in the group splitting up. Witnesses described how Barker circled the pod at excessive speed, leaving watching members of the public shocked and distressed.

Following an investigation by North Yorkshire Police, Barker was charged with intentionally or recklessly disturbing a dolphin – an offence under the Wildlife and Countryside Act 1981.

After pleading guilty, at York Magistrates Court on 9 June 2022 he was fined £200, and ordered to pay a victim surcharge and prosecution costs totalling £334.

PC Graham Bilton, Wildlife Crime Officer for North Yorkshire Police, who investigated the incident, said: “Dolphins are an intelligent, social species, often living in large communal groups. Over recent years sightings of dolphins off the Yorkshire coast have increased dramatically, proving popular with locals and tourists alike. But this has also led to an increased risk of human interference.

“Cetaceans such as whales, dolphins and porpoises are especially susceptible to disturbance, both physically and acoustically, and are legally protected here in the UK.

“I urge all boat and watercraft operators to act responsibly and respect the marine environment. We are extremely lucky in North Yorkshire to have such diverse wildlife. It’s important that we enjoy, protect and live alongside it.

“North Yorkshire Police is committed to investigating offences which have a detrimental effect on our wildlife, and I hope that this prosecution underlines that message.”

Geoff Edmond, RSPCA Inspectorate National Wildlife Coordinator, said “Operation Seabird was launched by the RSPCA, Police, the Marine Management Organisation and other partners with the aim of increasing awareness regarding marine wildlife disturbance.

“This investigation, working alongside North Yorkshire Police and the CPS, has seen cooperation, partnership working and highlights the great work Operation Seabird is now doing nationally.

“This was clearly unacceptable behaviour, and combined determination to investigate the dolphin disturbance in this case has been achieved with the help from the members of the public who witnessed this incident and who were themselves very concerned about what they saw taking place.

“Operation Seabird provides a focal point for us all to enjoy seeing the marine wildlife we are fortunate to have on our coastline, with the knowledge that incidents of disturbance will be investigated and dealt with.”

Rebecca Dunford of the CPS said: “This is believed to be the first prosecution as a result of the national effort to protect wildlife at sea.

“There is a cost to interacting with creatures in the wild and this result shows how committed we are to prosecuting this type of crime and protecting our wildlife.

“There is no excuse for these actions that can have a lasting negative impact on dolphins and other wildlife – and we will not hesitate to prosecute where our legal tests are met.”