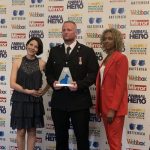 In 2019, North Yorkshire Police Inspector Kevin Kelly was presented with a Special Recognition accolade at the Daily Mirror Animal Hero Awards for his dedication to tackling wildlife crime

Chief Inspector Kelly joins the national unit from his home force North Yorkshire Police. Ch Insp Kelly, who currently chairs the UK Badger Persecution Priority Delivery Group, has been a prominent figure in the wildlife crime arena for a number of years, seeing him become a highly decorated enforcer.

The NWCU is an intelligence and investigative support function that oversees and helps police forces implement the UK wildlife crime strategy set by the NPCC. The NWCU oversees the running and support of the Priority Delivery Groups for wildlife crime and works closely with advisory bodies and government agencies to support enforcement.

Chief Inspector Kelly says “I’m delighted, but there’s no time for complacency as this is going to be a tough role. I have spent all my service working in the fight against wildlife crime and to take this national role is a privilege. Today is a good day for our animals who are harmed or exploited and a bad day for criminals. I intend to lead this unit from the front, being visible on the ground and supporting colleagues with enforcement across the UK. Many people who abuse and exploit animals will abuse and exploit people, and I want to continue to show that when we effectively enforce wildlife crime, this feeds into the wider policing picture, both in the UK and internationally”.

“I also have a strong belief in partnership working. Effective partnerships help provide good practice and accountability and I want to see this built up nationally”.