A man from North Wales who was photographed showing off his severely injured dogs after he used them to illegally bait badgers, has been given a suspended prison sentence. Disturbing images and footage of the dogs, who had significant untreated facial and jaw injuries, were discovered on Philip Stevens’ mobile phone after alleged activities relating to wildlife crime were investigated by the charity Naturewatch Foundation.

Despite attempting to conceal his identity on social media by editing photographs with emojis to hide his face, Stevens was traced, and a warrant carried out at his address on January 26 2022, by the RSPCA and North Wales Police.

Two terriers and two bull lurchers were subsequently seized from the property, along with blood-stained shovels, a locator collar and other digging implements.

On Tuesday 18th October 2022, Stevens of Lon Lladfan, Prestatyn, was given a 24-week prison sentence, suspended for 12 months, and also banned from keeping dogs for five years by magistrates at Mold Magistrates Court following a prosecution by the RSPCA.

He had admitted four offences – one under the Protection of Badgers Act 1992 and three under the Animal Welfare Act 2006 – at an earlier hearing on August 16.

The court heard how officers discovered two severely injured dogs living in outdoor kennels at the back of Steven’s property.

One, a white Patterdale Lakeland cross terrier called Millie, had extensive facial scarring resulting in the partial loss of her nose and an area of fresh grazing and reddening below her left eye. She was also over five weeks pregnant.

Another kennel housed a black and tan female terrier called Jess, who was sheltering in a plastic barrel. This dog seemed very reluctant to move and appeared withdrawn and lethargic. She was suffering from an extensive injury to her chin, which had scabbed over, and a laceration to the lower lip on the left-hand side. Both nostrils were also blocked, preventing her from breathing normally.

Two other dogs, a male and female bull lurcher, were also removed from the premises.

All four animals have since been rehomed by the RSPCA after being signed over into the charity’s care.

Stevens, who said he didn’t own the dogs but was responsible for them, was told that they were being seized, to which he replied: “Can I say goodbye to them. I love my dogs.”

Analysis of his mobile phone revealed dozens of further disturbing images and footage, including: 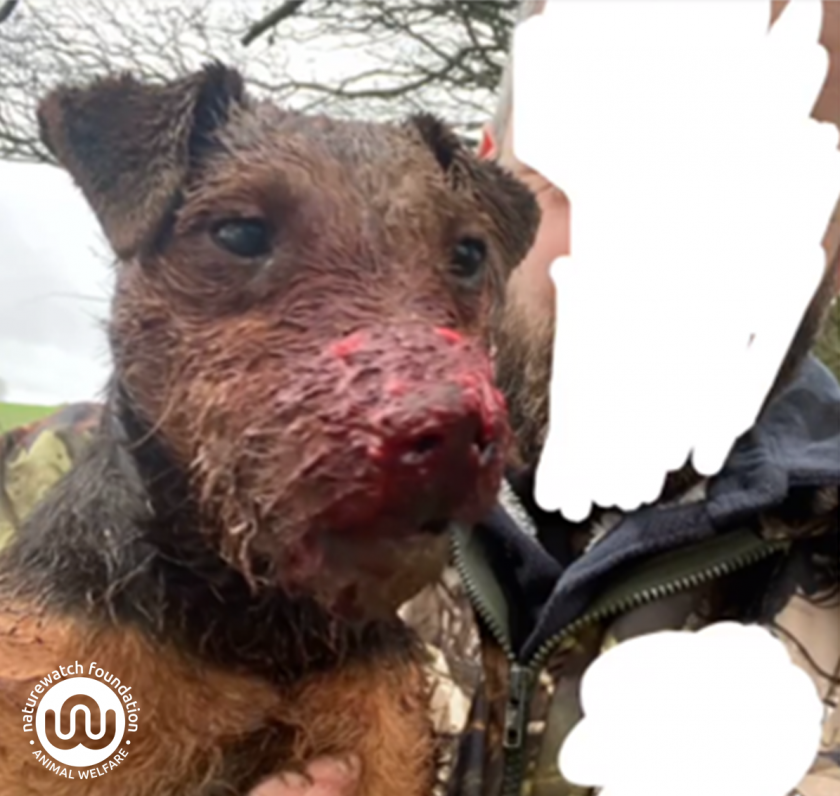 Giving evidence to the court, a vet who examined the dogs, said: “The video clips demonstrate two terriers with significant and severe facial injuries. Both of these dogs will undoubtedly have suffered extreme pain as a result of their injuries and would both have required emergency veterinary care. It is my expert opinion that both terriers were definitely caused to suffer as a consequence of severe pain resulting from the serious injuries that both dogs have sustained. Furthermore, the suffering has been prolonged by the failure to seek veterinary treatment. The badger was clearly suffering both physically as a result of the bite wounds sustained and mentally from terror and fear as a consequence of being attacked by a predator. It is obvious that a reasonably competent and humane person whose dog has sustained the level of injuries seen on the two terriers would immediately seek emergency veterinary care for the dog to alleviate the suffering. It is also obvious that a reasonably competent and humane person would not encourage or permit their dogs to engage in fights with wild mammals including foxes.”

Stevens was also ordered to carry out 180 hours of community service, costs of £500 and a £128 victim surcharge.