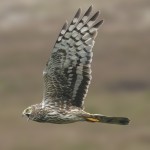 Northumbria Police have put out an appeal for information as a female satellite tagged hen harrier goes missing.

The appeal was put out on Twitter on 12th March 2021 (@NPNland) stating that a satellite tag fitted to a female hen harrier had last transmitted on February 24 to the south of Halthwhistle. The police ask that anyone who has any information that may assist should contact Northumbria Police quoting log 285 050321.

The RSPB report that the missing hen harrier was a young female named Tarras. Tarras was satellite-tagged as a chick in Langholm Moor in Scotland in 2020 as part of the Hen Harrier LIFE project. After fledging she explored the North Pennines Area of Outstanding National Beauty (AONB) before settling in South Northumberland.

The tag’s last fix showed that Tarras was roosting with other birds just off a grouse moor near Haltwhistle, just outside the North Pennines AONB boundary.

Satellite tags are highly reliable and continue to transmit even after the bird’s death. For a tag which has been functioning reliably to suddenly cut out, with no explanation or warning, strongly suggests foul play. This event is categorised as a ‘sudden stop no malfunction’. It is believed that Tarras is most likely dead.