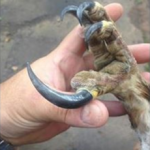 A picture from an advert on Facebook of a Norwegian golden eagle ended in a prison sentence of 1 year and 4 months.

On 27 October 2020, the Alingsås District Court sentenced a man in his fifties for one year and four months in prison for aggravated crime against protected species and smuggling. This is the biggest wildlife crime concerning the sale of animal parts of protected species ever investigated in Sweden.

The man’s passion for the culture of American Natives set him on a path that ended in 200 ads and sales on Facebook and Messenger of bear claws, eagle feathers, one python skin, parts of a golden eagle, wolf pelts etc. The National Operations Department (NOA) at the Swedish Police Authority and the CITES and Cultural Heritage Crime Unit have investigated the crimes. This is the biggest wildlife crime investigation concerning the sale of animal parts of protected species ever conducted in Sweden.

The sentence is the result of intensive investigative efforts by the Swedish Police, says Public Prosecutor Christer B. Jarlås. It all started with the Swedish police receiving a case, via the UK National Wildlife Crime Unit. They had information about an ad on Facebook of a man, who was later convicted, holding up a golden eagle from Norway. The picture could be found at places such as the Facebook group “Norwegian Indian & Trapper Association”. The picture resulted in a house search conducted at the address in Värnamo, Sweden, where the suspect was registered. The suspect no longer lived there, but many of his belongings were still there and were searched. Nothing was seized. 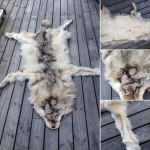 The suspect was called in for questioning at the police station on Borås, Sweden, along with his public defence counsel. During the questioning, it emerged that the suspect lodged with his cousin. He also stated that there were objects of his that were assessed as being of interest to the investigation. In parallel to the questioning, a search of premises was carried out with the assistance of local police. Seizures were made of several animal parts belonging to CITES-listed animals. When the police investigators came back from the questioning, a new search was conducted on suspect’s Facebook, and another ad for a python skin was found. In addition, because the documents they needed did not exist, the smuggling of the golden eagle from Norway into Sweden was also investigated.

When the investigation of the first case was almost completed, the suspect’s Facebook account was checked again and 258 new ads containing CITES listed animal parts were found and a new case was set up. 175 of the ads above remained in the case and in 113 of them objects were found and seized.

In September 2017, the suspect was called in for questioning at the police station in Alingsås, along with his public defence counsel. In connection to this, another search was conducted, this time of his car and at his new address. Further seizures of CITES-listed animal parts were made, inside his vehicle as well as at his new home. Following the extraction of data from his mobile phone, two sales of CITES-listed animal parts were revealed and subsequently linked to the suspect’s bank account.

In October 2017, a request for mutual legal assistance was sent to the United States, to a US prosecutor, in order to extract data from Facebook and Messenger, via a US court, and in November 2018 a CD record containing the extracted data was received from Facebook and Messenger. On it were found four sales that could be linked to the suspect’s bank account in 2015 and 2016. Experts were brought into the investigation. The birds and mammals’ section at the Swedish Museum of Natural History along with an independent ornithologist determined the species of the animals shown in the ads including the seizures made in the case of animal parts, claws and feathers. An age determination of the golden eagle and wolf pelts using the Carbon 14-dating technique was made at the Ångström Laboratory in Uppsala University, and an expert from the Swedish Board of Agriculture explained the formal requirements in line with the regulatory framework.

In all three cases, a final interview was conducted in October at the police station in Alingsås. Charges were brought in January 2020. The trial lasted five days in the Alingsås District Court in September 2020. Both the public prosecutor and the police investigator were present during the whole trial. The sentence was handed down on 27 October 2020. The suspect was sentenced to one year and four months’ imprisonment for gross crime against protected species and smuggling. Most of the items seized have been forfeited.

Deadline for appeal is three weeks from the pronouncement of the judgement. As always when it comes to wildlife crime, the complex legislation places high demands on the investigative process and the presentation before the court. In this case, there were both A and B-listed species in accordance with the EC convention 338/97. But the judgment is clear and pedagogical and will be a useful tool in these cases in the future, says Christer B. Jarlås.