The illegal persecution of Badgers is a UK wildlife crime priority, due to the sheer volume of crime against badgers.

The Badger Trust as part of the UK Strategic response to badger crime across the UK is supporting and leading a proactive Twitter week to highlight the continued plight of the badger against illegal persecution between Monday 7th of November and Sunday 13th of November 2016.

The Twitter week is part of Operation Badger (Formerly Operation Meles) which is an intelligence-led nationwide police operation gathering evidence of badger persecution and targeting offenders.

The Police, animal protection and welfare charities under the Partnership for Action Against Wildlife Crime work together to present a united front in the fight against badger persecution, and a multi-agency approach is again being utilised to highlight and tackle the illegal persecution of badgers during the week.

Although protected by law, mainly under the Protection of Badgers Act 1992, the badger is one of the most persecuted and demonized of all protected species, and perhaps by a wider cross section of society than any other animal.

Crimes such as Sett interference, shooting, poisoning, snaring, or badger baiting all result in either a loss or disturbance of their habitat, or immense suffering and ultimately death under sustained and unthinkable circumstances. These are sadly all too frequent events across the UK still today, with many of the perpetrators travelling long distances in gangs to commit offences. Wider issues of criminality are also often linked to these offenders.

As part of raising public awareness of the illegal persecution of badgers, it is asked that any criminal or suspicious criminal incidents, and information on persons engaged in Badger persecution or wildlife crime should be reported to the police and to the Badger Trust via the online report system found on the Badger Trust Website http://www.badger.org.uk/

The Badger Trust Crime and Intelligence Co-ordinator and Secretariat of the UK Badger Persecution Priority Delivery Group, Andy Swinburne added “The continued illegal persecution of badgers across the UK continues to be a blight upon modern day society and shows little sign of diminishing sadly. By highlighting these crimes in partnership with other like-minded agencies and the publics support, we can proactively demonstrate our revulsion of these sometimes-sadistic crimes and bring to justice those persons responsible. I look forward to a successful week of action as part of the continued UK strategic plan”. 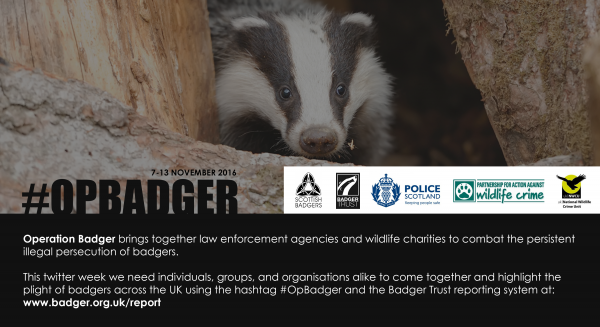