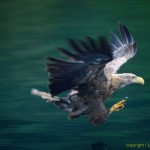 A rare eagle which was found dead in Aberdeenshire had been poisoned, police have confirmed.

Officers said they are treating the death of the white-tailed sea eagle as suspicious.

Its corpse was recovered from Donside, Aberdeenshire, in April, and a post-mortem examination has now established it died from pesticide poisoning.

The raptors were reintroduced into Scotland in the 1970s after becoming extinct in the UK in the early 1900s.

There are now over 150 breeding pairs in Scotland.

Insp Sheila McDerment, of Police Scotland, said: “As well as being illegal, poisoning is a cruel way to kill a bird.

“It also puts the lives of other creatures and plants at risk and impacts negatively on our environment.

“This incident is particularly upsetting because these rare and beautiful birds had been reintroduced to Scotland after being extinct throughout the UK.”

She appealed to anyone with information to contact the police.