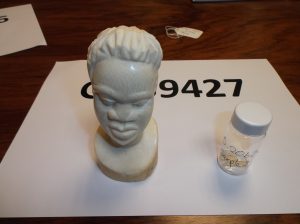 A 26 year old antiques dealer has been sentenced to 7 months imprisonment for trading illegally in elephant ivory.  Shane David BALL of Derwent Avenue, Workington, who had been to stand trial in January, changed his plea to guilty at Carlisle Crown Court today (13th Sept 2016).

The case was the result of an investigation by the National Wildlife Crime Unit and Cumbria Police Wildlife Officers.  In July 2015 officers noticed a number of adverts for ‘Cow-bone carvings’ appearing on the auction website eBay.  Although the adverts stated that it was ‘Cow-bone carvings’ being offered for sale, accompanying photographs of the items appeared to be elephant ivory.

In 2009 eBay had imposed a global ban of the sale of elephant ivory on their website.  Intelligence gleaned by the NWCU during previous cases, indicated that some traders were advertising ivory as either ‘ox-bone’ or ‘cow-bone’ in an attempt to bypass eBay’s filters.  Although evading eBay’s filters is not necessarily a crime, the sale of elephant parts and derivatives is prohibited under the Control of Trade in Endangered Species (Enforcement) Regulations 1997.  However elephant ivory that is classed as ‘worked’ prior to 1947 is exempt.  ‘Worked’ means that it has been altered from its natural state for jewellery, art, adornment, musical instrument or utility; so a piece of elephant ivory that was carved prior to 1947, would be exempt and it may be legal to sell it.

In accompanying text posted with the adverts, the seller stated that his Grandmother had been in Africa and brought the carvings back to the UK in 1947, which coincided with the date of the ‘worked derogation’. The 1947 date would have been irrelevant if they had in fact been cow-bone.  Officers believed that the items being offered were actually modern and not pre-1947.

Enquiries with eBay identified the seller as Shane BALL, who over a 4 week period had posted 22 adverts for carvings all carrying the pre-1947 provenance.

On 17th July 2015, officers from the NWCU and Cumbria Police executed a search warrant at Ball’s home address where they seized the carvings that Ball had been advertising on eBay.  The items were all labelled as being ivory and priced up for sale.

Ball was interviewed and although he acknowledged that they were ivory, he maintained that he had inherited the carvings from his Grandmother who had brought them back from Africa in 1947.

Ball was re-interviewed, but refused to provide any additional provenance for the ivory and was subsequently charged with the ‘Prohibited keeping for sale’ and Prohibited offering for sale’ Annex ‘A’ species (elephant).

Ball pleaded not guilty at an earlier hearing and a trial date had been set for January 2017, but changed his plea to guilty at today’s hearing.

Recorder Grice told Ball that inventing the provenance for the ivory as being pre-1947 was intended to deceive and was an aggravating factor of the offence.  He sentenced Ball to 7 months for each offence, to run concurrently.  The suspended it for 18 months.  He was also ordered to attend a ‘Rehabilitation of Offenders’ Course and pay £1134 costs, which was the cost of the Radio Carbon Dating analysis.  The cost will be repaid to the Wildlife Crime Forensic Analysis Fund, which funded the tests.

The prosecution offered no evidence to two additional charges relating to the prohibited purchase and sale of a Leopard skin, so those were dismissed.

Following the case Chief Inspector Martin Sims, Head of the NWCU stated, “The illegal trade in ivory is a matter of global concern.  Anyone who chooses to trade outside the law should expect a custodial sentence”.

Photo credit NWCU:  One of the ivory carvings that Ball claimed had been pre-1947, tests indicated that it had come from an elephant that was probably living in 1970s.