A 60-year-old pigeon fancier has been fined for shooting and killing a sparrowhawk. 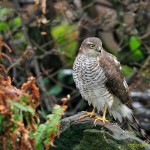 Duncan Cowan, from Cowie in Stirlingshire was fined £450 after pleading guilty to a charge under section 1(1)(a) of the Wildlife and Countryside Act 1981 at Stirling Sheriff Court.

The court heard that on the afternoon of 18 April 2019 a bird of prey was spotted attacking a pigeon in a field adjacent to Mr Cowan’s garden.

Mr Cowan was seen coming out of a shed with an air rifle and firing at the bird three or four times.

Following a call to the police the Scottish SPCA took the injured sparrowhawk to their wildlife centre for treatment.

The veterinary surgeon found the bird had a chest wound and had lost a significant amount of blood. The bird was bandaged, given intravenous fluids, painkillers and antibiotics but it died from its injuries shortly afterwards.

The vet’s conclusion was the bird suffered prolonged pain and distress from when it was shot until it was anaesthetised. The cause of death was “Severe trauma consistent with death due to shooting and associated blood loss“.