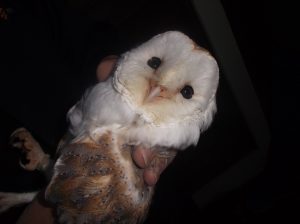 On Friday 15th November 2019 Lee WELLINGS, 45 yrs., a breeder of Barn owls from Scholars Walk, Walsall was sentenced at Walsall Magistrates Court for 13 offences relating to the prohibited sale of Annex ‘A’ species, making false statements to obtain permits to sell Annex ‘A’ species and for possessing three wild Barn owls.  WELLINGS had pleaded guilty to all the offences at a previous hearing on 24/10/2019.

The trade in Barn owls is strictly controlled and the commercial use, sale, offering for sale etc. of any Barn owl is prohibited unless it is covered by a valid permit, commonly known as an Article 10 Certificate or A10. In conservation terms A10s are a vital tool in respect of the protection afforded to wild birds.  A legally issued A10 shows that a bird has been lawfully bred in captivity.

A breeder of such species fits a uniquely numbered leg ring to a bird within the first few days of life. The breeder then applies for an A10 by providing the unique ring number, plus details of parent birds and hatch date.  Only once an A10 is issued can it be sold or offered for sale.  A10s are not issued retrospectively.

Mr. WELLINGS had been involved in breeding and selling Barn owls since around 2014.  He had applied for and been issued with over x120 A10s for Barn owls he claimed to have bred. In August 2018 a lady answered an advert for a Barn owl that was posted by Mr. WELLINGS.  She called at his house to collect the owl, for which she paid £50.  Mr. WELLINGS fitted a ring to the owlet and told her he would apply for an A10 in a couple of weeks and send it on. The owl became sick within a few days and subsequently died.  The circumstances were reported to the National Wildlife Crime Unit (NWCU) and West Midlands Police Wildlife Officers. Subsequent analysis of A10 applications by NWCU revealed a number of anomalies.  Mr. WELLINGS’ breeding claims also seemed excessive.

On 18/12/2018, officers from West Midlands Police and NWCU executed a search warrant at Mr. WELLINGS home address, where they found six Barn owls, only three of the owls were properly ringed.  Three birds were not ringed.  The birds were made subject of a retention notice.  Officers also seized a quantity of documentation.

Examination of the paperwork and further analysis of his A10 applications revealed that Mr. WELLINGS had been supplying false information in his applications.  On 57 of his applications he had provided details of parent birds that he had never possessed, let alone bred from.  Mr. WELLINGS later admitted this as fact.  The x57 A10s were issued by the authorities in good faith on the understanding that the information provided was true.  In practice, none of the A10s would have been deemed to be valid, so any subsequent sales would also be illegal.

The x57 false applications were subject to 10 of the charges.  A further sale of a Barn owl without any A10 was identified, subject to a further specimen charge.

When interviewed Mr. WELLINGS immediately admitted all of the offences.  He also failed to show lawful possession of the three Barn owls that were not ringed.

Sentencing WELLINGS, District Judge David Webster outlined the seriousness of his offending telling him “The regulatory system is vital to the conservation and protection of endangered species. Your offending strikes at the very heart of that system”.  He told him, “The starting point for your offending is a prison sentence. Had it not been for your early guilty plea, the positive references I have received and your impeccable good character, particularly your years of dedication as a foster parent, I would be sending you to prison”.

Arrangements are currently being made for the re-homing of the six Barn owls.

Barn owl is a species of bird that receives the highest level of protection under the Wildlife and Countryside Act 1981. It is also listed on Annex ‘A’ of the Control of Trade in Endangered Species (Enforcement) Regulations 1997 – now replaced by the 2018 Regulations, but because the offences pre-date the 01/10/2018, they were brought under the 1997 Regulations.