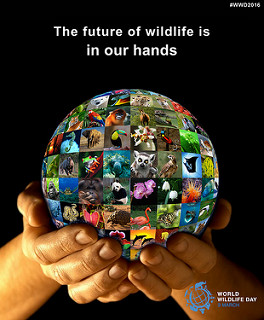 On 20 December 2013, at its 68th session, the United Nations General Assembly (UNGA) decided to proclaim 3 March, the day of signature of the Convention on International Trade in Endangered Species of Wild Fauna and Flora (CITES), as UN World Wildlife Day to celebrate and raise awareness of the world’s wild animals and plants. The UNGA resolution also designated the CITES Secretariat as the facilitator for the global observance of this special day for wildlife on the UN calendar.

World Wildlife Day will be celebrated in 2016 under the theme “The future of wildlife is in our hands.” African and Asian elephants will be a main focus of the Day under the theme “The future of elephants is in our hands”. Countries around the world are encouraged to highlight species of wild animals and plants from their own countries, adapting the global theme to suit.

The world’s wildlife,  whether charismatic or lesser known,  is facing many challenges . The biggest threats to wildlife are habitat loss  as well as overgrazing, farming  and development . Poaching and trafficking in wildlife driven by transnational organized crime groups pose the most immediate threat to many iconic species.  Elephants, pangolins, rhinoceros , sharks, tigers and precious tree species are among the most critically poached and trafficked species across the world.

About 100,000 elephants were estimated to be slaughtered for their ivory between 2010-2012. While we are seeing positive progress to tackle illicit wildlife trafficking, more needs to be done by all of us. On this World Wildlife Day, we hope to see even more commitments coming from countries and citizens around the world.

Governments, law makers, enforcement officers, customs officials and park rangers across every region are scaling up their efforts to protect wildlife. It is also up to every citizen to protect wildlife and its habitat. We all have a role to play. Our collective conservation actions can be the difference between a species surviving or disappearing.

The future of wildlife is in our hands.

The future of elephants is in our hands.